A chestnut cooperative in the Massif des Maures

An alternative method for wildfires

The French Mediterranean basin witnesses numerous wildfires. Current methods result in the creation of an ever growing firewall network. Soon there will be no forest left. The chestnut cooperative brings a local and more sustainable response to a pressing territorial issue. 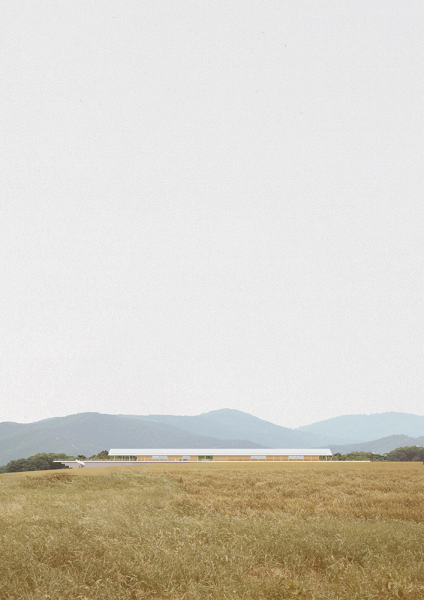 The student generates an architecture project related to the premises of the Thesis written during the previous semester, as well as responding to the raised interrogations from his/her writing. Involved in an autonomous work, along with chosen tutors, the student should demonstrate his/her capacity to link theory and project, hypothesis and making, constraints and decisions concerning various scales of the project (site, realisation), methodology, objectives and outcomes. An approach of the project as research, inscribed in an enlarged referential context, however targeting a spatial response to real societal questions.

In Mediterranean France, the Massif des Maures witnesses numerous wildfires. To counter this phenomena, authorities massively invest into infrastructures that denature the territory and its communities, without great efficiency. This project aims to empower sylviculture activities within the region, taking La Garde Freinet as a testing ground. It is a forest village located on the way of the traveller, halfway between the shore and the larger road network. Large surfaces of chestnut trees justify the village to be an ideal location to sustainably prevent fires through the forest and undergrowth clearing. The making of a chestnut cooperative becomes a visual and physical link between the village and the forest. Due to the slope, the scheme stands on a 150m long concrete slab, itself carried by three strips of foundations to reduce its footprint. The timber structure, replicates the gable roof system already present in local and industrial buildings. Inside, the production and public activities are separated by a covered outside space which states the public entrance. These two large and linear volumes drive the visitor towards a belvedere, big enough to host village parties, while facing the Maures’ hills. The modesty of this program responds to the locality as well as addressing the territorial concerns, offering a place of production and collective gathering. 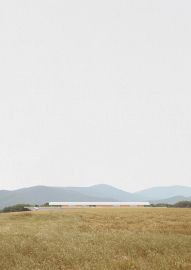 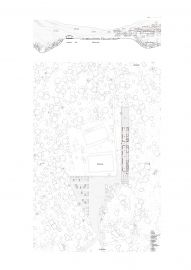 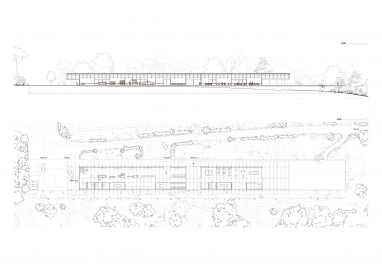 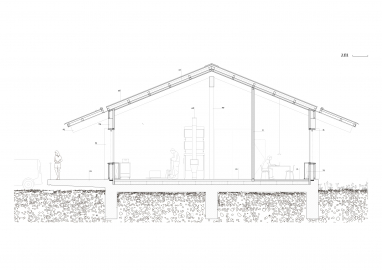 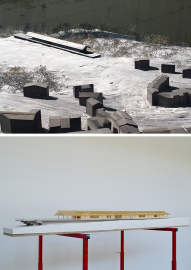 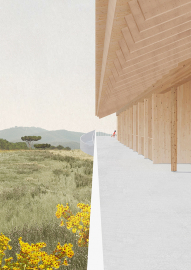 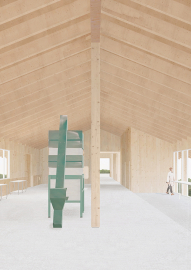