At the end of the Rhine, on the periphery of Rotterdam, stands Hoek van Holland. Since 1876, the Hoek connects the United Kingdom with the European network, reinforcing the movement of people and goods on the continent. The re-establishment of border as consequence of Brexit, requires a rational and generous solution for this major infrastructure node. 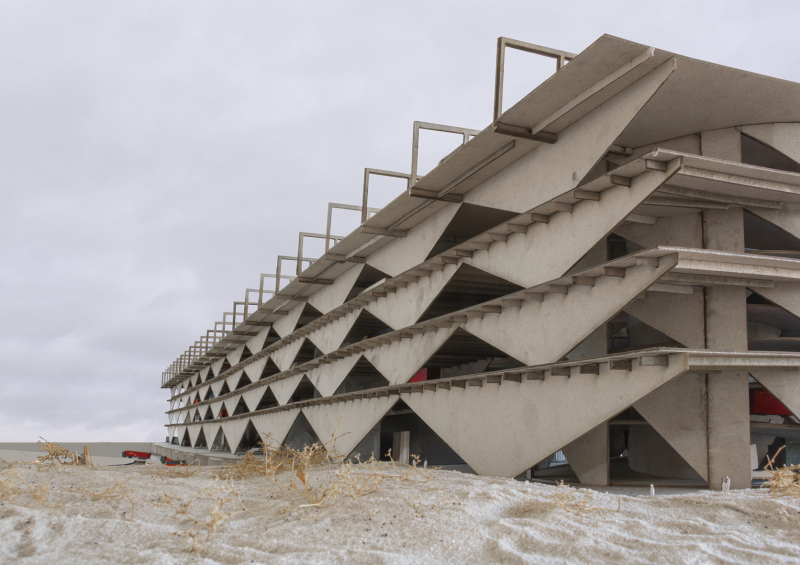 No one knows what will happen: the quantity of trucks, the type of controls and the modalities of health inspections. Despite that, at the end of the river, at the interface between city and beach, here is a distribution and civil engineering project. An architecture project. The project starts from a question: how to create an infrastructure that works perfectly and that would allow space for excess, for generosity? How to take advantage of the magnitude of such a program to project places that could not be rationally thought without it? To do so, this project invents the typology of the «multi-storey harbour», a building that would separate the flow of trucks and passengers by providing public spaces.

TERRITORIAL ANSWER Infrastructure is seen as one of the rare projects where architect can still work actively on the territory and, unfortunately, one of the abandoned programs to engineers. Working on this function reaffirms the relevance of its role in the design process, being able to crystallize and transcend various concerns in order to build a whole while acting generously. The project connects the beaches of Rotterdam with the river. It acts as a joint between these two systems with their two specific geometries. In a very concrete way, the public ground floor can be crossed by these different promenades and connects them to each other. A place where people from Rotterdam, a family from England and a cyclist from Switzerland can meet. PROGRAMMATIC INTENSITY An existing train line is extended to the building to combine boat and beach access. Cars and trucks arrive laterally and descend to the lower level, leaving the ground level for public activities, the arrival of the train, shops and the connection to the beach. Two helicoidal ramps connect the control levels. Bridges are hanging from a cantilevered level to connect the different floors to the ships. The upper levels are occupied by the crossing between the European and English zones, two hotels, a roof terrace, waiting areas, shops... QUESTION OF FORM Here is a strong form, whose presence is due to the reasons of its structure, which replaces a beam/column system with a load transfer system made of triangular prefabricated concrete sails. This structure draws a geography of stable places where trucks are controlled, and of places of movement determined by the possibilities of passage of trucks according to their height and the design of triangular structures. A unitary form, with a somewhat strange character, yet understandable in its simplicity and by the evidence of an elementary construction system. It is monolithic and yet made of assemblies, massive and yet airy. 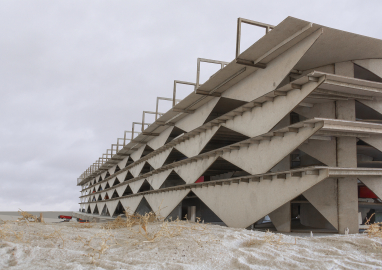 Model picture - View from the beach 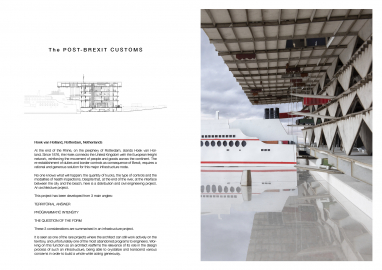 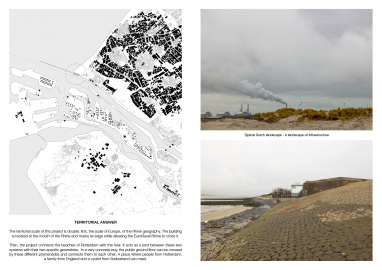 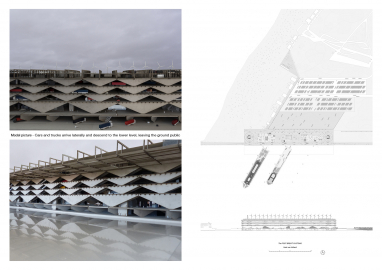 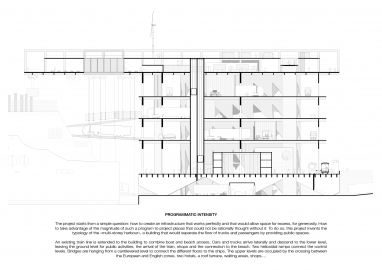 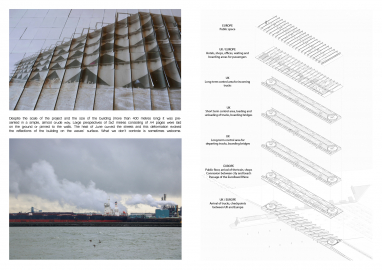