This thesis is a proposition for the renewal of the human-landscape relationship. It deals with the specific landscape in South Bohemia with the Golden Canal serving as its spine. By referring to historical and current focal points and lines along the canal I devise a web of findings to help people in becoming more interested in this landscape.

The landscape of South Bohemia is one of fishponds, canals, and rivers. The typical flat landscape is traversed by the nearly 50 kilometres long Golden Canal. The canal was built at the beginning of the 16th century and it complexly connects South Bohemian meadows and woods but also villages and towns. Without fundamental modifications it flows through the landscape with an increasingly diminishing interest of the population in it. The peril of this disinterest is not merely the chance of a missed opportunity for a trip to a river. The disinterest may lead all the way to the destruction of the sophisticated and fragile ecological as well as economical system.

To understand the human-landscape relationship I observed, mapped, and described the cohesion and interrelatedness of the canal, its environs, and the people that visit it or live along its banks. I work systematically: from the charting of a significant portion of Třeboňsko to individual kilometres. I followed the persisting signs of the relationship such as the remains of settlements, baroque statues, or inconspicuous footpaths. I was interested in the variability of the atmosphere along the canal. I followed the varying degree of biodiversity. The story is completely different in each village and town: it flows through watermills but also merely lines the barns. The levees are strengthened in both the towns and the villages. The banks in the forests are soft and unconsolidated. The canal is not only the spine of the aquatic ecosystem but also a guide through Třeboňsko. Nonetheless, it is rarely used for this purpose. I tried to figure out the connecting elements which accompany the canal along its course and which would facilitate orientation and historical understanding. I analysed the account of these elements in two books: the “Dead” and the “Alive”. While Dead introduces the individual places and the canal itself, Alive draws attention to a number of points and lines and forms a comprehensive overview of new findings. In Alive I continue working with focal points and lines by employing three processes: I revive the ceased ones, I create new ones by suggesting the transformation of the defunct ones, and highlight the persisting. I intentionally do not clearly dinstinguish between them. This forms a web of layers. Through these layers I make the Golden Canal a lively place involving people again as its devisers and fulfilling the condition for its healthy and efficient functioning. It was key to define the consequences of the relationship between the canal and people for the canal itself. The diversity and heterogeneity of a landscape which has been influenced by people but maintained a very naturalistic character motivated me to create a handbook to help understanding its value and beauty. 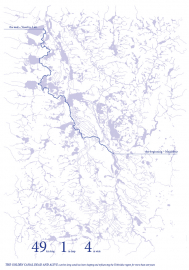 THE GOLDEN CANAL DEAD AND ALIVE 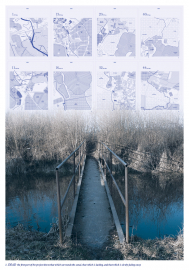 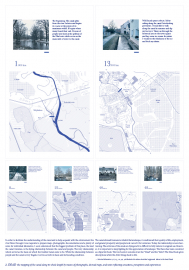 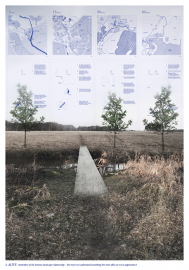 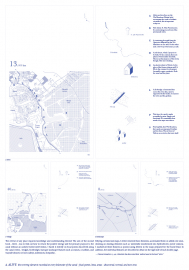 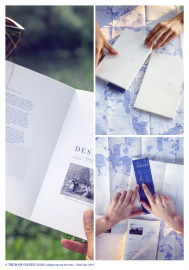 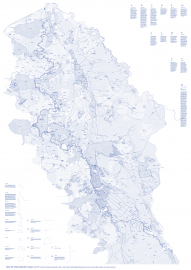