A new way of designing and observing memorials

Мonuments have the strange power of becoming invisible. The crisis of monuments as voids in space is especially expressed in post-communist societies. Because the disappearance of the communist narrative destroyed the whole symbolic system to which memorials belonged as spatial manifestations. The concept 'Agalma' attempts to answer this problem. 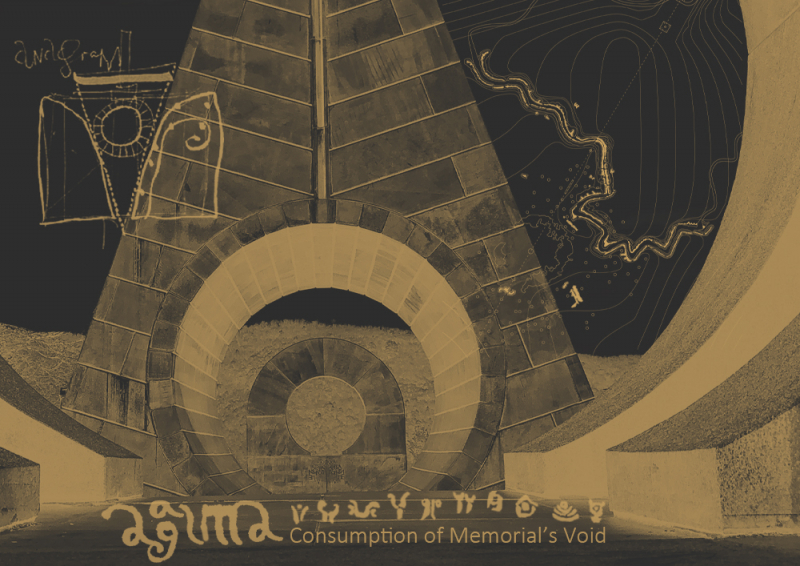 In what way can monuments become places of desire in the consumer and post-communist societies? In order to perceive the void as a surplus, ‘’gestalt’’ perception must be suppressed. Suppressing focused vision creates a sense of fear and uncertainty, which leads to sensitivities for intuitive memory. Creating a subconscious memory is a way of consuming the void of the monument. The task of the project is to upgrade the existing memorial to the Battle of Popinа (Central Serbia) according to the above principles. This memorial represents an important work of architect Bogdan Bogdanović and an additional task is the designing of relations with him in order not to jeopardize valuable authorial expression.

On October 13th, 1941, at the Popina River partizans was aimed at stopping the penetration a far stronger Nazi units towards the Republic of Užice. After the war the location of the partisan headquarters on a hill above the confluence was selected to be a memorial park, overlooking the entire territory where the battle took place. According to the architect Bogdan Bogdanovic's design a memorial was erected on this site only in 1981, and it is never completely finished. The environment of this memorial is the site of thе project. In the analysis, I noticed a motive that pervades most of Bogdan Bogdanovic's work. It is the motif of the access path that does not lead directly to the monument, but winds through the surrounding terrain. In this way, the author visually connects the user with the overall context of the monument. This motif will be used as the basic concept of the memorial extension project. The continuation of the access path through the forest area is motivated by a desire for mimicry with the environment, in order to preserve Bogdanovic's authorial expression on the site and by a desire to make the forest an integral part of the memorial landscape. The winding movement along the path that plunges in and out of the terrain provides the desired dynamics and a sense of uncertainty about movement. The aim of designing different: tilts of walls between which a path crosses, the walls’ height, the width of the path, empty space between walls - framing the desired ambience of the forest, is to create subconscious remembrance of feelings. Along the path the facilities of the memorial complex are arranged as underground pavillions. The ambient experience of the forest is complemented by some 200 special wire sculpture (the names of the killed partisans are on them) which swing freely in the wind, creating a sound effect as a special experience. The short term influence of the project is the revitalization of the space of the ‘’Popina battle’’ memorial. As the long term impact the concept ’’Agalma’’ is trying to establish a new way of designing and observing memorials as places to be experienced and not just looked at. 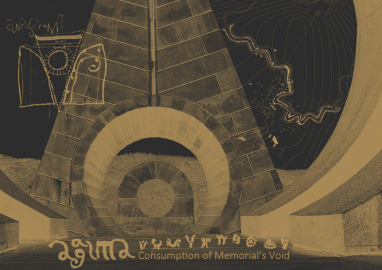 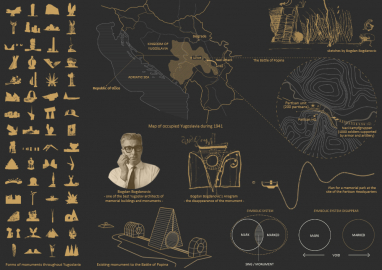 Explanation of the concept 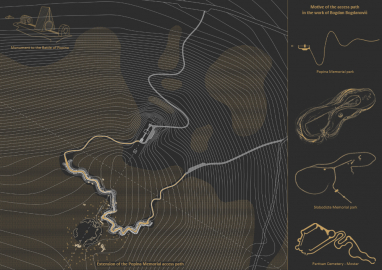 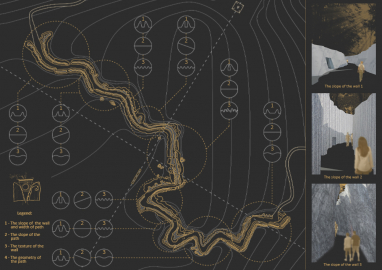 Designing of the path and walls 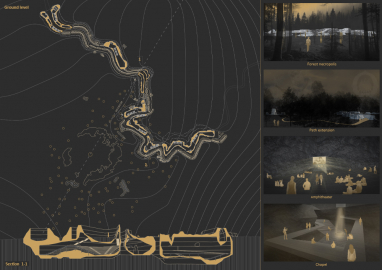 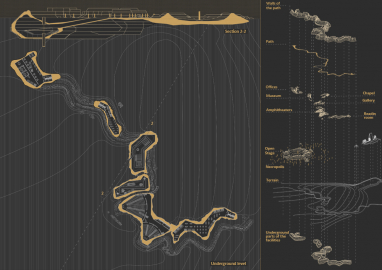 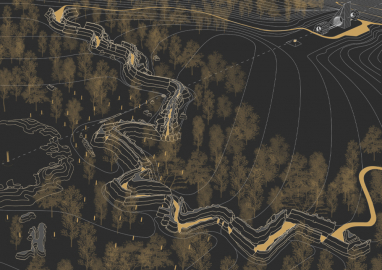