Death as a journey

The goal of the project is to bring back death to the world of the living in Maastricht. The last few decades the place of the dead is moved from the heart of the city to the suburbs. The concept 'death as a journey' is embodied by a columbarium and a transport hub. Inspired by the Roman Necropolis, visitors will first deal with death before they enter the city. 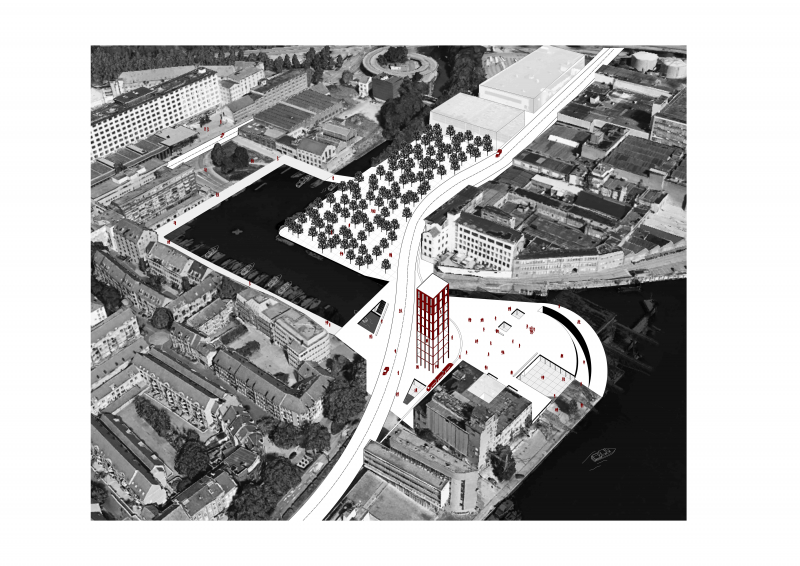 Memento Mori, remember you must die; the awareness of our own mortality is a crucial part of life. But there is no longer room for death in a society obsessed with youth and vitality. Today, most crematoriums and cemeteries in our Western world are established in a way that they can only be reached by car. Due to this, death seems to disappear quietly from the city centre and from our lives. Moving (on) stands for the continuation of life after death. We have to accept death as a part of our daily life. Moving (on) also stands for the movement or transition that death experiences back from the suburbs to the city centre. Finally, moving (on) also relates to the way in which we deal with our heritage in the city.

The site is located in Maastricht, the Netherlands. It is an ancient location which carries a lot of history. The site itself is positioned between a port (het Bassin) and a river (de Maas). The location is characterized by old factories and port buildings. The dynamics of this location inspired me to determine the program of my project. The metaphor of death as a journey will become specific by the realisation of a columbarium in combination with a transport hub. Cars, boats, bicycles, busses and the tram will all come together at this point. The columbarium will be given a prominent place, they form the columns in the complex.This concept offers an important association with how the Romans dealt with burials in their city. In the Roman Necropolis, travellers and visitors were first confronted with death before they entered the city centre. The transition from life to death is brought together with the change of means of transport. A third transition is taking place in the existing building: ‘Het landbouwbelang’ will continue to exist on the site and a new layer will be added. Also a new building will be placed on the site. A tower, which is connected by a plinth to the basement of the exiting building, will be added. Accentuating the site with a landmark indicates that death is present all over the city. This design also offers a vision for the future: it’s adaptable in function and in time. Right now, Maastricht still demands for parking spaces in the city, but cars are expected to disappear from our streetscape over time. When this happens, the parking spaces will disappear in this design so the columbarium can be expanded. This metamorphosis will completely transform the floor plan and facade of the tower. Urn columns will be added from the top to the bottom. In this way, the tower will create a timeline in and of the city. We avoid death during our lives and go through a shock wave of emotions when confronted with it. We seek to bury our loved ones in a quiet and green environment, far from everyday reality. This design is an experiment that might spur a different view of how we could deal with the architecture of death in the future. 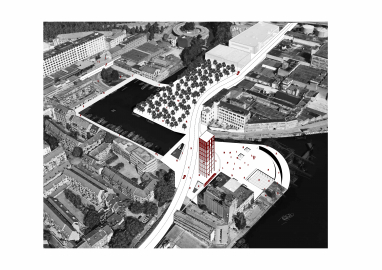 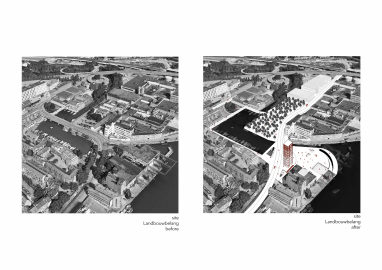 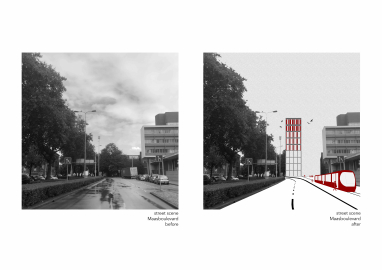 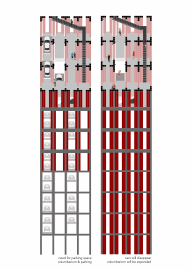 Transformation of floor plan and facade 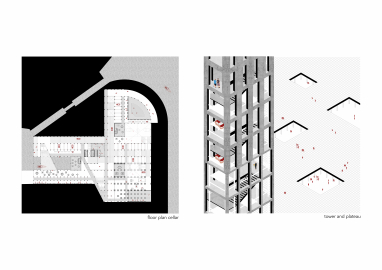 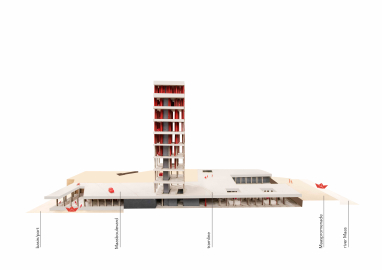