Between the Limit and the Trench

Spatial Correlations in the Corinth Canal

The project is about the Corinth Canal, a great human achievement of the 19th century, which has significant cultural and geological value, but today it's falling into oblivion. Through a "3 axes" analysis of the landscape, we aim to create a social, scientific and cultural pole where the visitors face the Canal's real dimensions and history. 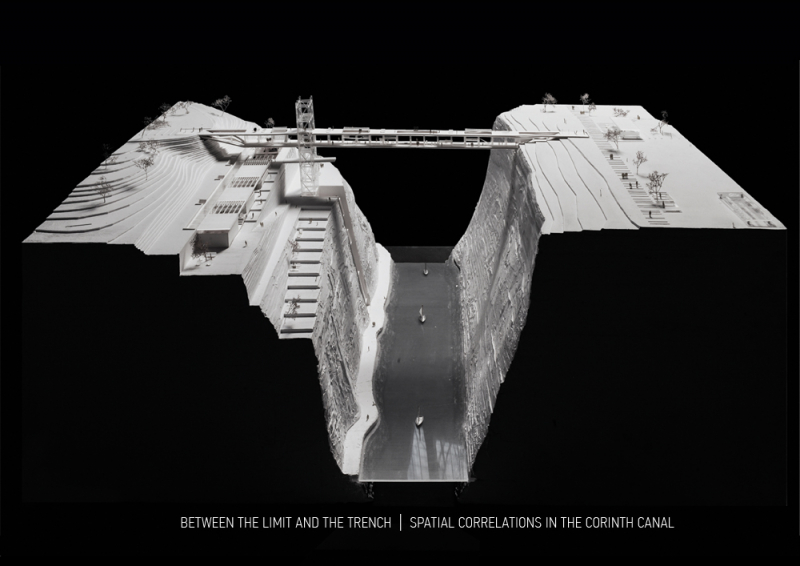 The Corinth Canal has a strategical position in the center of Greece, where land was divided in two pieces and the seas were united. It's a trench that depicts human effort against nature's constraints. Diolkos the ancient stone-paved road which was used to pull ships from one gulf to the other and Nero's first excavation works show that people have been preoccupied by this spot for thousands of years. The Canal is an enormous piece of infrastructure and a transport hub, but it is also a geo-cultural palimpsest full of traces of human activities, educative and worth-visiting. However, its value remains unknown. Due to the degradation, the site and its surrounding area are perishing and falling into oblivion.

A "3 axes" analysis of the landscape was our basic tool in order to draw conclusions and give shape to our proposition. We considered as x axis the one parallel to the Canal axis and as y axis the transversal one which links the two banks. The z axis was very important, as well, because it's the one that links the upper ground level with the water level. Time, as a fourth dimension, is decoded and becomes the content of our intervention. Therefore, we aim to create a pole which concentrates a part of the unique experience of the Canal and gives the chance to the visitor to face its real dimensions and history. As a result, the visitor understands the essence of the landscape through an educative procedure based on observation and introspection. The proposition consists of three entities: a bridge as an exposition about the Canal (swing-link), a building as a museum about its history and geology (face to) and a tower as researchers' space (submersion-emersion). Each one confronts a different cartesian dimension of the three ones which are included in the canal. In this way, we create a network which allows people to experience the Canal's section on different levels and layers. This network is located at a critical spot in the Canal, at its highest point, and it has to face various constructional challenges linked to the Canal's particular morphology and geological consistence. At a larger scale, the project is anchored to existing uses and routes and it is part of a larger network which we design in the area in order to facilitate the access and to promote the exploration of the site and its surroundings. To conclude, this project proposes a strategic planning that does not concern only the local area. The past shows that Greece, despite facing an economic crisis, managed to co-ordinate with the revolutionary spirit of the industrial period and to cope with a great challenge, accomplishing both a great technical and economical feat. So, the proposal re-establishes the vision of a public project that could help Greek economy, while at the same time it would constitute a social, scientific and cultural pole. 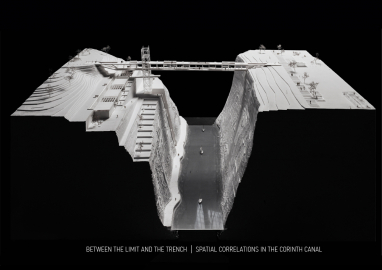 Interacting with the Corinth Canal's section 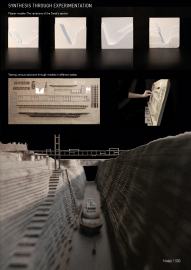 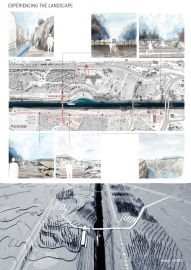 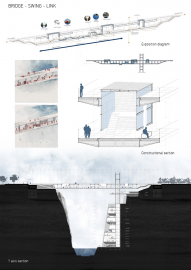 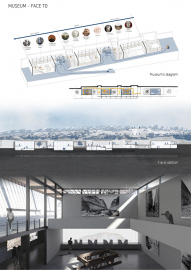 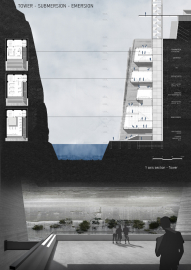 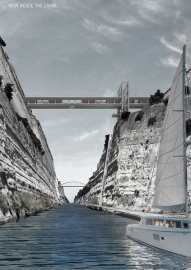 View inside the Canal