Situated in Munich’s east side, a structurally dense, multi-used, ambiguous and complex building was designed which therefore is described as a thick brick building. Based on the idea of a collective household this project encourages all occupants to interact and live side by side. 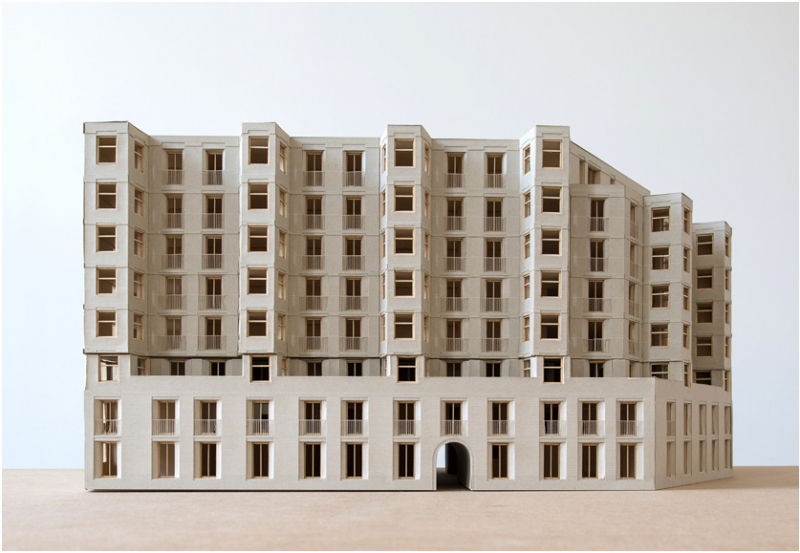 Until now, the Werksgelände at Munich’s east train station is characterized by industrial buildings which are flanking the railway in order to facilitate an efficient loading process. In the future this area will be redeveloped as a lively, multi-used district of Munich with the a new Philharmonic Hall at its heart. The existing industrial buildings seem more like large containers, not designed for inhabitation but through their appropriate scale they integrate into the urban structure of the city. They sit comfortably side by side next to the existing residential buildings. Together these create a rich mixture of living and working with great potential of further elaboration and transformation.

Proposed solutions to the housing crisis in the European city are often reduced to the single ambition of building more homes year-on-year, while the more profound question of what type of housing should be built seems to go unanswered. In our opinion there is a real need for a new language, capable of responding to the questions raised by changing household patterns and lifestyles. The incorporation of working space within the domestic environment is also becoming increasingly relevant. These new types of buildings still need to be integrated in the European city, which is characterized by the block and the street, the yard and the square. Therefore, we propose a large structure of generous rooms and linked passages within a robust facade, where the interior is recalling large halls of ancient buildings, where generosity of proportions has a lasting character and windows create a scale one can measure oneself against. Deep thresholds create intermediate “spaces between”. This is why we describe our proposal as a ‘thick’ building as it is structurally dense, programmatically complex and ambiguous in its language. Our general programme is based on the topic of a collective household. Next to different apartment typologies, the building also incorporates commercial and industrial usages. The strong and shielding expression of brick as a material, led to the idea of incorporating a women’s shelter. This diverse programme is reflected in the conceptualization of the facade. The west facade is shaped by a long bowfront while the east elevation is defined by clear incisions. Both sides are held together by a conjoint plinth and a continuous, horizontal brick theme which is composed of only one brick size and by protruding lines becomes a modern interpretation of ornamentation. On the inside an atrium with a sequence of interacting staircases and visual references connects these various functions and encourages all inhabitants and users to explore interactions and relations, so that the building operates as one organism, nestled inside the industrial fabric of the area. 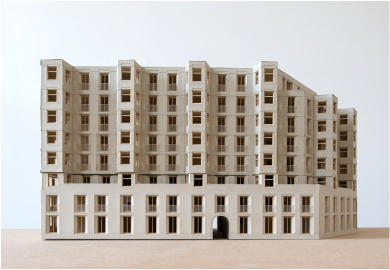 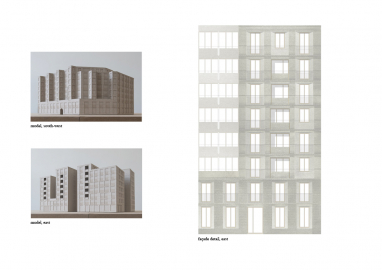 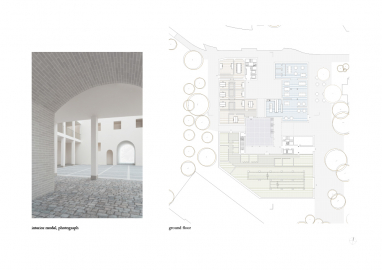 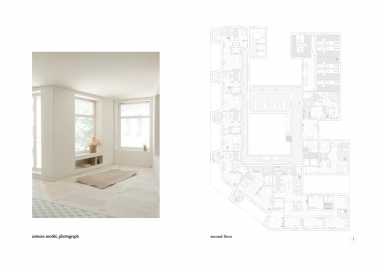 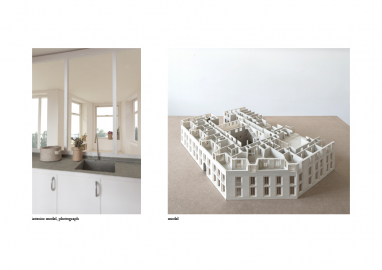 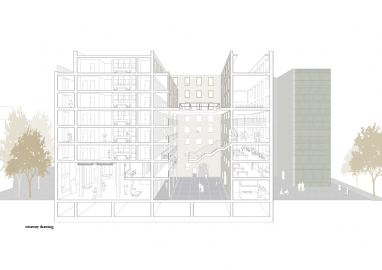 Department of Architecture at Technical University of Munich (TUM)