Deplorable Framework is a proposal for the holistic reinvention of the British countryside. The formation of a vast new forest recomposes the landscape of the Peak District National Park and the structures within it. As human intervention becomes legible, impressions of nature are emancipated from naive conceptions of beauty. 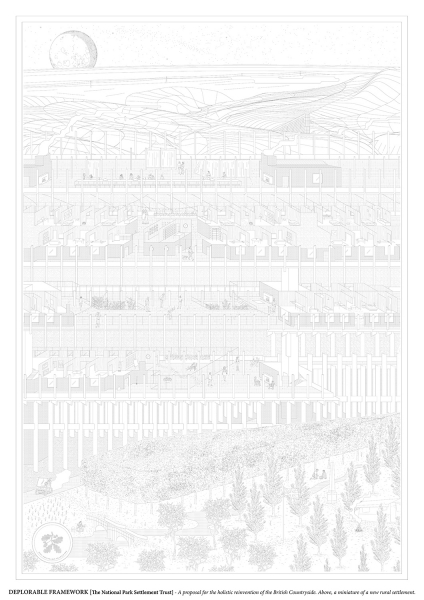 Unit 14 contemplated worlds we inhabit in imagination and in everyday life, where quotidian routine intimates our relationship to a greater cosmic existence. It was interested in how the imagination works when we are on our own, in small groups, and as part of wider society, and how this affects our material existence. It sought to renegotiate and reinvent the countryside - the land outside our cities, to re-inhabit and to re-use for cultivation.The unit studied the English landscape in all its variety, designing for small groups of like-minded people who have come together through kinship or common interests to found communities and forge relationships with the land and among themselves.

Deplorable Framework is a rural settlement within a forest, a response to a series of housing, elderly care, and landscape management crises, working in anticipation of vast funding bottlenecks that will result from Britain’s departure from the EU, taking this moment as an opportunity to explore alternative approaches to the governance and inhabitation of the countryside. A new branch of the National Trust, The National Park Settlement Trust, is tasked with developing underused portions of land in National Parks, to create a series estates equivalent in grandeur to those already within the Trust’s portfolio. Sited on land formerly of Hardwick Hall, north of a reservoir network supplying water to nearby cities, the framework opposes panoptic and superficial methods of land management. By re-appropriating existing funds for the beautification of forests in the Upper Derwent Valley the proposal hides a new settlement inside a perfect square of oak and larch plantations. The forest assumes a distinct pattern, and the buildings within it are imagined as towers and walls, built upon clearings, as extrusions of a road that slinks through the valley. Howden Estate’s timeline develops in step with the decades-long growth of the forest. First constructions are bothies, their visual catchment defining the plantation’s radial pattern, followed in time by long, slender walls providing dense accomodation for a range of elderly tenants, typically excluded from the Peak District as terrain becomes impassable with age. Walls grow as columns, invisible in the forest, breaking through the tree canopy to cut the skyline as landmarks. The settlement recomposes elements of the picturesque, sublime and pastoral, alongside reference to forgotten moments of local history. It becomes an allegorical collage that makes cultivation both visual and tangible. A mongrel of infrastructure and country mansion, the forest joins a lineage of landed estates that stand proud in the landscape. As human intervention makes complex management practices clear, impressions of nature are freed from didactic notions of beauty. 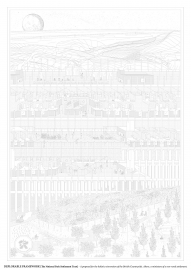 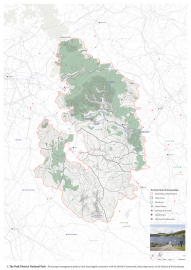 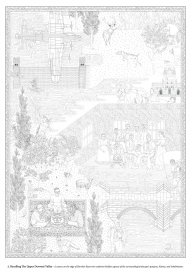 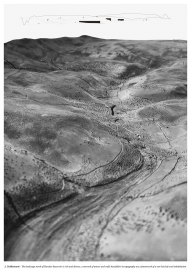 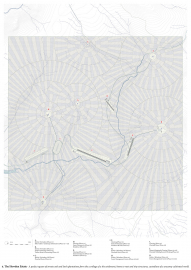 Cultivation and Recomposition: The Howden Estate 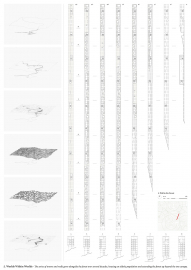 Worlds Within Worlds: Structures in the Forest 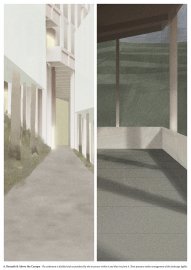 Beneath and Above the Canopy: Reinventing the British Countryside

School of Art, Architecture and Design