The thesis reflects on the strategies, the tools through which the project of contemporary architecture can direct towards the regeneration and preservation of parts of the landscape, the relations, the cultural heritage on which the incomparable richness of Venice's urban narration is founded. 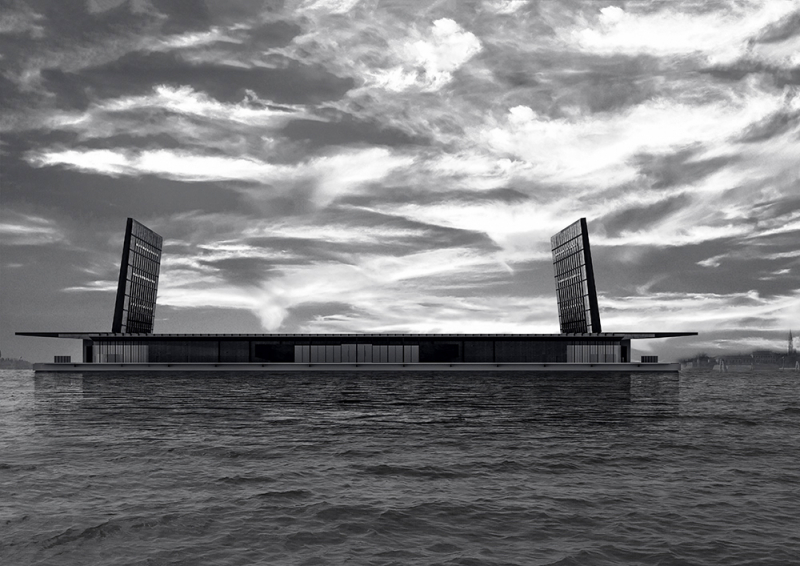 In the succession of islands that lead from Venice to the sea outlet of Alberoni, Poveglia is the most representative case study. Despite its current state of ruin, it is of particular interest as it constitutes an exemplary synthesis of the conditions that characterise the entire lagoon system. The hypothesis consists of the resurfacing of the basement/ruin of the ‘Fortino della Ca’ Rossa’, an octagonal military structure disappeared around 1850, of which it is foreseen the possibility that the ruin can still be found at the bottom of the southern lagoon, between the island of Poveglia and Malamocco. The same offers an exceptional opportunity for the introduction of a new lagoon centrality.

In this scenario composed of fragments, the need arises to give form to a foundational act: the introduction of an architectural structure with a strong symbolic and figurative identity that will allow the project to involve a territorial scale, as a new hub in correlation to the system of built islands rooted on the Santo Spirito canal. Besides offering a series of collective uses of excellence, this should to be able to involve the scale of the landscape, not through camouflage, though introducing a modification that at the same time defends its form and identity. The recovery of Fortino della Ca'Rossa, its re-emergence and exhibition, bring to light completely renewed values and relationships in relation to the possibilities of fruition of the landscape. Its restitution leads us to consider the value of the fragment as a document of a special form of artificiality and construction of the lagoon landscape, specific urban space composed by an archipelago of local centralities. Islands, fortified octagons, shelters and batteries as a whole constitute a system of resistant places and, observed in their different depths, allow us to grasp the wonder of the beginnings, of which the figure of ruin offers only a fleeting intuition. Thus, particular project themes emerge such as the islands-enclosures and their integration in the lagoon landscape, the theme of the edges and the different relationships that they create with the inside and the outside, superficial and deep, often conditioning in a totally opposed manner the concept of void and mass, monumental complex or common building. Using the traces, the principles that derive from them as foundations for a re-foundation of the place, the project proposes itself as a form of archaeology of the present that brings back a lost identity to a part of the lagoon territory. Also embracing new spaces dedicated to human activities, it will experiment the construction of structures that grant scientific progress and humanistic culture, in a broader vision that brings together research, contemplation and art as new defences for the city of Venice. 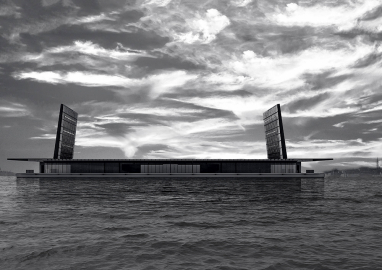 View of the new cultural center towards the island of Poveglia 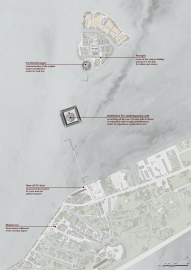 General plan, project of a new institution for contemporary arts, a new hub for culture and science 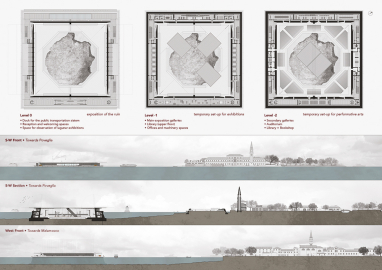 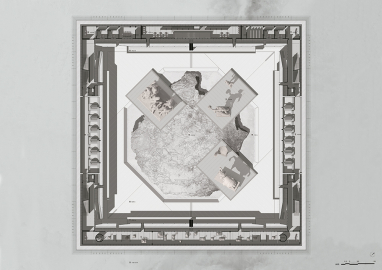 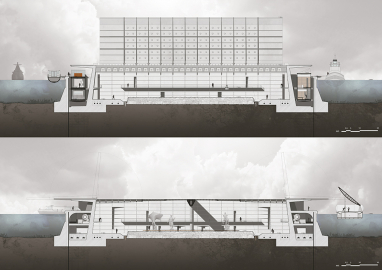 Generative sections of the structure, mass and voids, depths 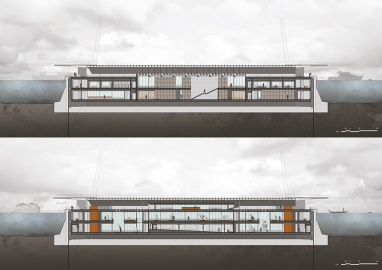 Sections, interiors of the library, archive, bookshop and of the exposition galleries and auditorium 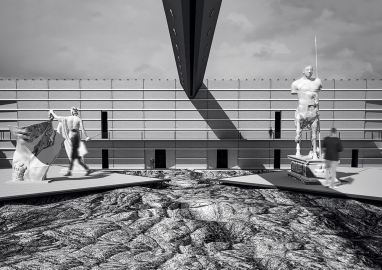 Rendering of the interior, exposition of the ruin and temporary set-up for an art exhibition