By deconstructing the ruinous roof-framework of the „Old Brickyard“ just outside the village of Bordenau, Lower Saxony, Germany, the landmarked „Zig-Zag-oven“ is being uncovered. The contemporary extension holds the function of a Landbad ( bath in a rural environment) and approaches the existing brick-oven spatially and atmospherically. 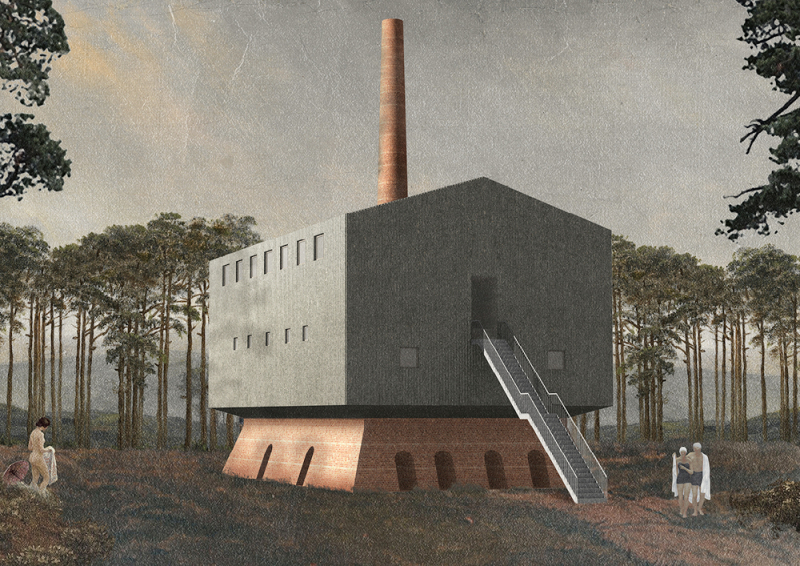 The project aims to address the issue of an increasing number of vacant buildings in the rural periphery and to raise an awareness for local craftsmanship and its direct connection to the built environment. The adaptive reuse of an inoperative, landmarked brick-oven built in the 1930s serves as an example for constituting an appropriate and contemporary sense of togetherness for the rural community. Locals and travelers alike are enabled to experience a former place of production by the public function of the Landbad, which respects the historic importance of the site and strengthens the identity of the village.

The Landbad Bordenau in the Old Brickyard is intended to serve as an architectural prism of brick-production and the product itself. Since 1850 the Oberheus produced mainly formed bricks for refurbishing destroyed sacred and public buildings in the greater area of northern Germany. The oven is cold since 2003. The brickyard lies outside the village centre on a clearing within the dense pine forest close to the riverbeds of the Leine. The design includes an exterior stairway made of reused steel and addresses the Landbad at the height of the treetops. Via this ascent or the elevator the guest reaches the reception, the locker rooms and the showers. A threshold slows down the arrival at the bath. The chimney remains as the backbone within the interior, naturally guides the flow of guests to the pools and serves as an element of orientation. The temperature of the rooms rises, the closer one gets towards the brick oven. Concrete benches enable the guest to rest close to the chimney after the movement inside the water. Determining for the design has been the atmospheric and spatial approach towards the heart of the building: the landmarked Zig-Zag-Oven. Enclosed behind the massive, angled walls, the former cabinets are being reused with a sauna and thereby made being spatially experienceable. The place where the brick-production took place becomes the high-point of the Landbad-experience. A diving-pool marks the end of the tour through the bath and the oven and releases the bathing-guest back into nature or guides them towards another tour. The consciousness of the material shall remain on the buildings the bricks from Bordenau have been used for like churches and train stations. Therefor the new facade is cladded with ceramic tiles and no historic bricks and the interior is defined by cinder-block walls, which hold the continuous space. To make the trias of elements experienceable and to create a retro-perspective of the existing structure, the project aims to establish a new destination besides the local soccer-club and the community-centre and to constitute rural togetherness in a contemporary manner. 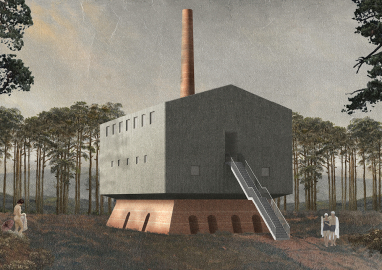 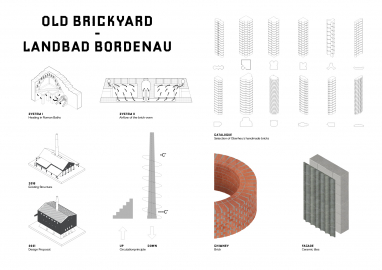 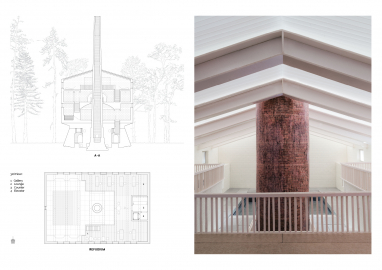 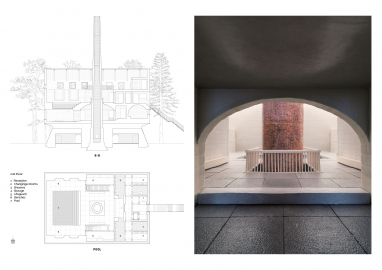 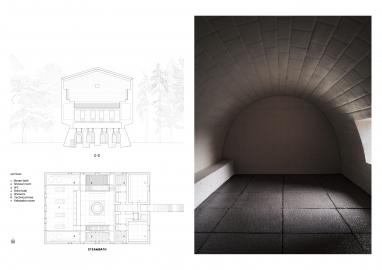 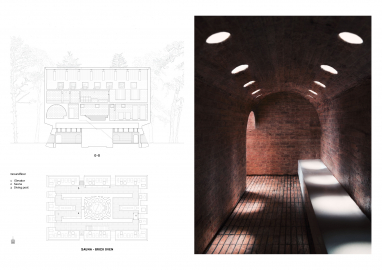 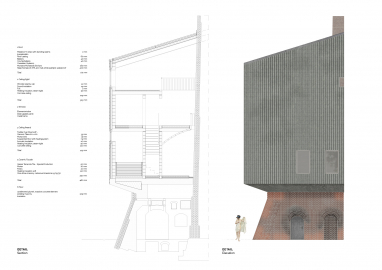