Cohousing development for the Young-old

San Junipero is a collective housing building for the young-old which incorporates the wisdom of living from private housing. The project is a machine for living, where the leisure and various scenarios are articulated through an architectural promenade for the choreography of everyday life. Generating, through space, the maximum desire for living. 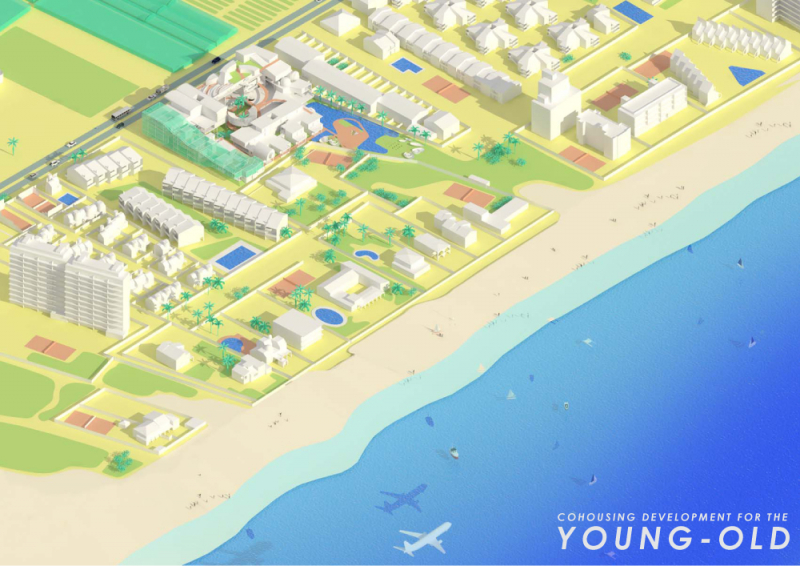 The fast aging of population and the establishment of the welfare state has provoked the appearance of the Young-old as a large social group. In 2064, 40% of Spain's population will be above the age of 65. Retirement understood as a state of exception, represents the idealized outcome of modernization, a society based on permanent leisure. The rise of themed retirement developments in Florida is an example of this new lifestyle, carefully manicured theme parks, in which the juxtaposition of references to different moments of history generate what J.Broudillard calls the effect of hyper·reality. By learning from it, I propose a new residential model for the young-old in the Mediterranean coast.

The material starting point from where I developed the design were a multitude of private houses by Architectural Masters, which I post-produced and combined with its architectural opposite -a profane territory in Valencia full of modern ruins from the Spanish economic crisis, irresponsibly built without any consideration other than profit. My suggestion is to juxtapose both realities in what I have called "Pastiche fetish": The juxtaposition of fragments of history over the ruins of modern times. The decision to work with these modern ruins is a fully considered choice. It means to work with the decadent remains of a society that generates these constructed cadavers in the same way that doesn't care about their elder people. From a material point of view, these sites can be seen as opportunities. Due to their state of ruin they have lost much of their economic value, despite their privileged position at the seafront. Throughout the formalization process, I stacked the houses, first in an almost caricaturesque way and once the houses where getting closer to each other I found many project opportunities which merged in the encounter. The result is a heterogeneous building whose density is halfway between the disperse lineal city and the residential towers along the coast. The building is denser when it is closer to the road, and dissolves gradually as it gets closer to the beach, with a program dedicated to leisure time and body wellness. A ramp ties together the whole building, to encourage residents to keep in constant movement and guaranteeing accessibility to all the houses. The project system based on the patchwork and collage of cultural fetish is not done in the hope of isolating residents in an atemporal nostalgic time, but rather celebrates the passing of time and the wisdom resulting from a whole life living inside of culture. The pseudo-theme park that incorporates references from different moments of history is not only a representational form of postmodernist architecture but rather a performative architecture challenging the exercise of individual and collective memory. 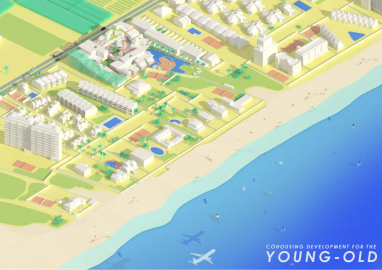 San Junipero. Cohousing development for the Young Old in El Perellonet, a fragment of lineal city 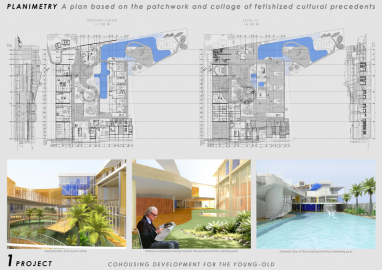 The project. Plan and common spaces 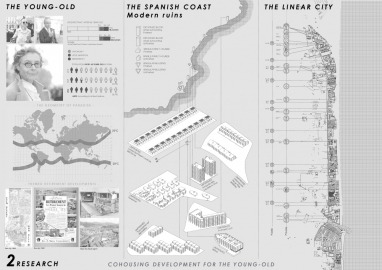 Research. The young-Old in the geometry of paradise. The Spanish Coast. The linear city 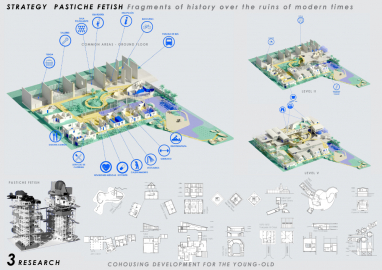 Research. Private housing in the archive of architecture and the Pastiche Fetish strategy 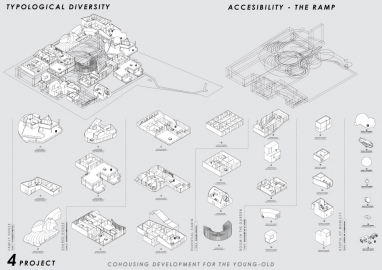 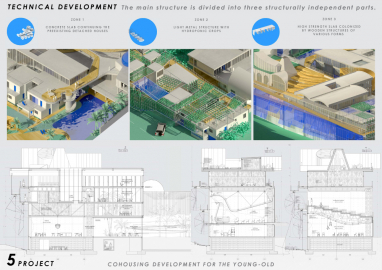 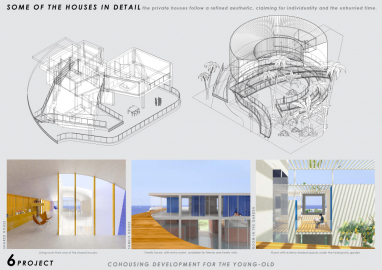 Project. Some of the houses in detail.