In the Age of Gravity Independent Architecture

The project investigates the future of urban environments using Vienna (Austria) as case study. It proposes a new ephemeral infrastructure which while provides climatically controllable temporary spaces, becomes integrated with the existing urban-fabric in order to increase the city’s dynamism, adaptivity and by that also its capacity. 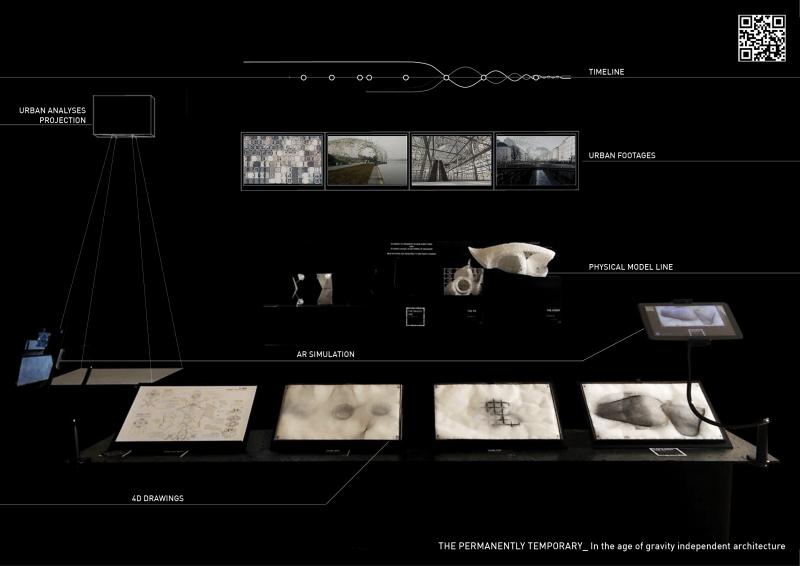 ”There must be alternatives to what we have learnt to think knowing.” Andrea Börner Emerging issues due to population growth in urban environments and changing patterns of social behavior require the investigation of novel strategies for architecture and urban design. The increasing contrast - between the rigidity of the physical environment and the rising value of the notions of temporality and flexibility in everyday life - generates tension in the operation of global cities. One way - of facilitating to release this tension – is to increase the level of adaptation and responsiveness of the physical space with the focus on inner-urban environments.

Hypothesis: If architecture could be ephemeral and adaptive, the existing city volume could be programmed more efficiently by the activation of its time dependent snoozed-zones. The resulting shift in the urban pattern would support the intensification of the city and the establishment of a new social contract. The utopian vision is developed on a multi-dimensional timeline which allows evolutionary explorations of new, ‘permanently temporary’ infrastructural interventions and their speculative impacts on urban dynamics. Today: The project assumes that the exploitation of the potential of unmanned aerial vehicles to become not only supports in building fabrication processes (builders) but also as active building elements of short-lived structures in order to decrease the duration of the construction, transformation and deconstruction of climatically controlled temporary spaces, will lead to the design of the „drones of tomorrow”... Tomorrow: The project proposes a new design for the unmanned omnicopter (Eth Zürich research project by Raffaello D’Andrea), and names it: FLIBRI. Flibries (“flying bricks”; drones of tomorrow) can generate and store energy, radiate heat, supply and reflect light and by that create specific micro climates to provide optimal qualities for new functions to appear at locations it could not happen before. After tomorrow: The integration of the Flibri-system ( Flibiri flocks) into the urban volume is visualized (hypothesized) in 4 evolutionary steps. The project narrative emphasises the changing relationship between the existing, static urban fabric (hardscape) and the new Flibri-System (softscape), while it highlights the altering goals of the new infrastructure and its level of influence on urban dynamics: 1) The Basics: detached Flibri-flock operation for existing interior and exterior quality improvements, 2) The Event: physically connected space-reactivation, 3) The Playground: construction of new static structures to provide space for flock experiments, 4) The New Ground: hard- and softscape equalization period. 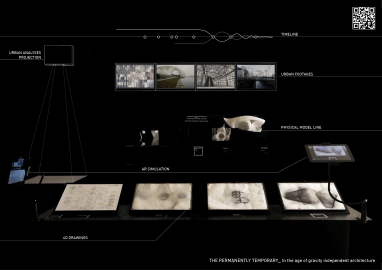 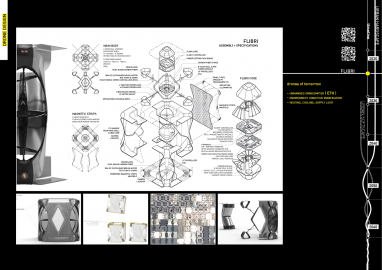 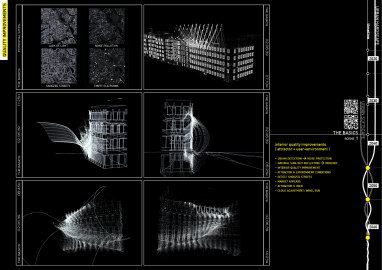 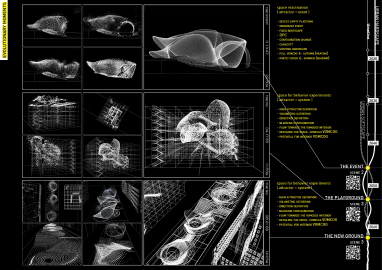 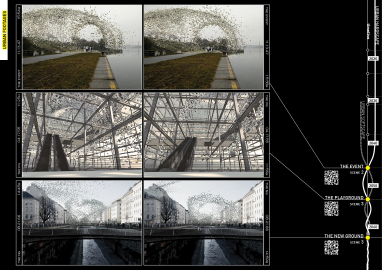 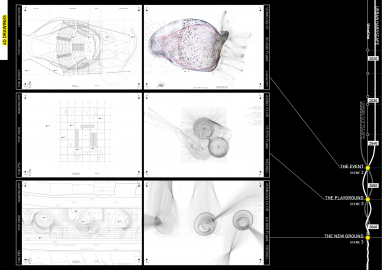 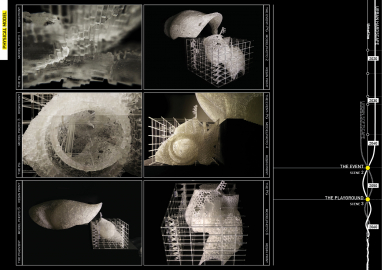