From ancient ramparts to contemporary metropolis, the history of outskirts reflects the demand of society. However, the inhuman family-culture in the contemporary era is changing the social position of animals. Urban Safari proposes alternative model of architecture and urbanism that supports relationships between nature, animals and humans. 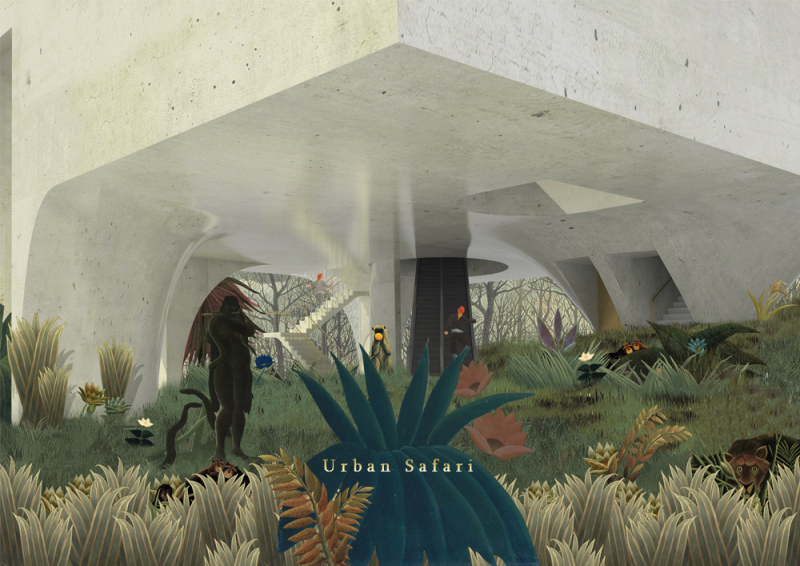 The dissociation of nature has been followed by huge urban expansion, producing cities which act as containers solely for humans. Even though zoos and parks are architectural attempts at bringing nature into urban areas, they have actually driven further dissociation of animals and nature by captivity. This project attempts to create unusual spatial atmosphere and experience in the mixer of a public bath and nature in the context of “Urban Safari”. A public bath that brings the collective humans in an intimate and naked way produces a primitive place that contrasts urban culture. However, the embarrassment that humans feel in the bath is a testament to the lack of primitiveness that they have today.

From ancient ramparts to contemporary metropolis, the history of outskirts reflects the demand of society. However, the drastic development of civilization made urban boundaries expand beyond the national level. The urban expansion reached the global level and the sudden change caused massive development without reflecting the demands of society. Occupying the largest surface on the planet cannot be the vision for humanity. At the same time, the global urbanization cannot be denied. It is the moment to reconsider how urbanism can evolve in itself. Defamilialization is now a feature of post-industrial society; traditional family-culture is disappearing due to urban expansion. Urban individuals form an inhuman family-culture with companion animals. The generalization of this culture is changing the social position of animals. However, natural space for animals is becoming a thing of the past. Urban expansion is leading to unprecedented rates of deforestation, animal extinction, and extremely low species diversity. The anthropocentric view that is driving urbanism produces a dichotomy between urbanism/human and nature/animal. “Urban Safari” is an attempt to tear down the current boundaries between humans, animals, and nature across the globe. Deconstructing social boundaries between them will reorganize the “nature-culture” boundaries and facilitate cross-species interactions such as the inhuman family-culture mentioned above. “Primitive rendezvous” is another original model of architecture that supports “Urban Safari”. Marc-Antoine Laugier’s “The Primitive Hut” was a structure intended only for humans, but the model of “Primitive rendezvous” proposes spaces for coexistence. “Therme Natur” is an architectural proposal for a public bath in the context of “Urban Safari”. This idiosyncratic bath has the potential to promote “Primitive rendezvous” architecture beyond the anthropocentric ones that exist today. The construction of such architecture will embody the vision of “Urban Safari” and create a world of cross-species sociality. 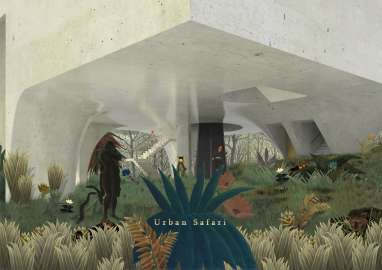 The Scenery of "Urban Safari", On the ground level of "Therme natur" 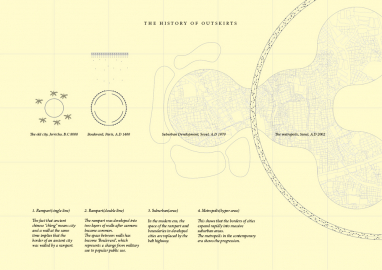 The history of outskirts 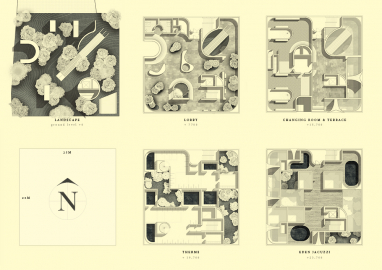 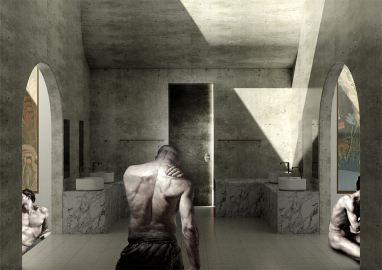 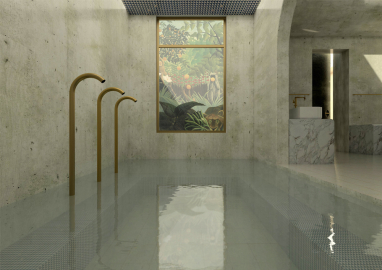 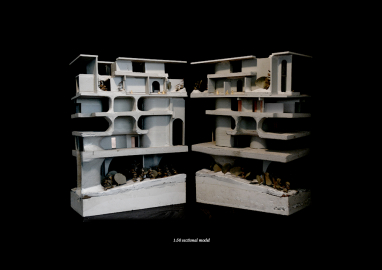