This diploma project chose to place its setting in downtown Athens. Our attention was captured by its latent dynamic and thus turned towards the parking lots. Those structures can be seen as machines a habiter. The inhabitant of this case, the car, seems to be deserting them. Amongst all types that of the underground seemed more challenging to deal with. 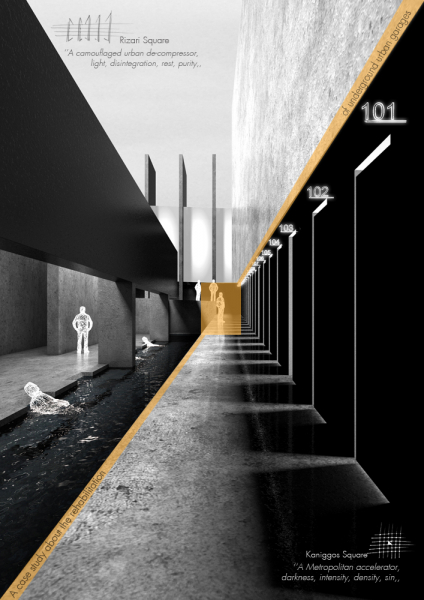 The locations were chosen so as to create a dipole, the parts of which constitute a case study. Two radically different settings, the one in Kaniggos square near Omonoia, the other in Rizari street near Kolonaki. The latter surrounded by a sparse urban fabric, green spaces and cultural activities, mainly hosted by museums. The former situated in one of Athens’s densest areas, surrounded by intense metropolitan activities, congestion, commotion, transportation. Two places, two versions. The clean and the dirty, serenity vs constant motion. The context as the defining principle of design. An obvious paradigm of two opposites in program and form which celebrate their birth from the womb of Athens.

This project comes as an underlying gesture towards the needs of our time. It’s about taking advantage of existing structures and breathing new life into them. It’s about proving that the city, through its energy may revitalize its dying parts which in turn will offer this energy back. The two parking lots, imminent to nationalization in the upcoming decade offer a ground of experimentation as to their new role in the metropolis. Their economic collapse, evident in their balance sheets calls for a savior. In this absolutely pragmatic scenario, they are eventually chosen to become the metropolis’s incubators, its accelerators as shown from the program chosen in Kaniggos or its carefully camouflaged urban de-compressors as in Rizari. In this scenario, crisis in building offers a chance to alter, re-construct, re-inhabit places through a whole new baptism of the existing. The blank canvas of their huge reservoir of square meters also offers a chance for multiple programs to be tested, a chance that we couldn’t miss to exploit. Thus in Kaniggos, a flea market, an underground square surrounded by a short-stay hotel, a gym, retail shops and a subway station combined with a party space form its intense metropolitan program. On the other hand, in Rizari, a large public plaza, study rooms, a library, public and private baths all overlooked by a hotel again form the metropolitan counter-balance of Kaniggos, the celebration of the body and serenity. The challenge we posed to ourselves was to push the capacity of those spaces to the limit and to fit all those, contradictive at first, programmatic elements by cutting and sewing throughout the existing structure. The more permanent inhabitance of those spaces through the programmatic element of the hotel came as choice stretching the notion of their viability after their alteration. 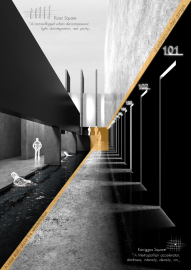 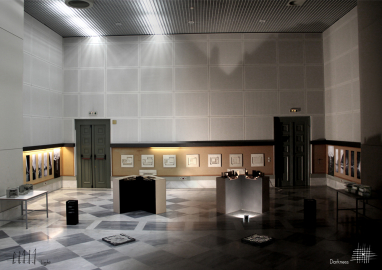 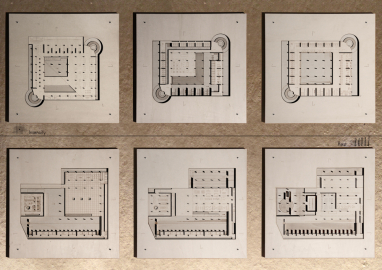 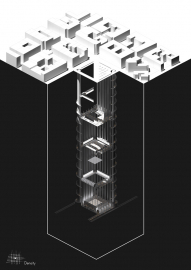 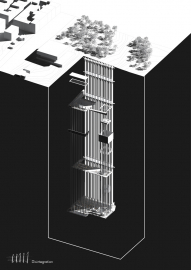 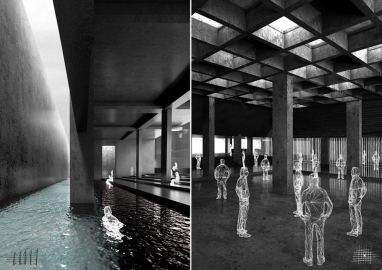 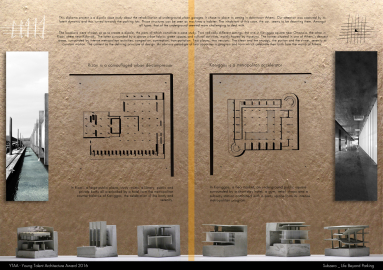