(on debris, oblivion and sadness)

The Metropolitan Cenotaph of Berlin proposes an affective turn in architecture. A great compound monument, placed amongst and beneath ruins, imagines a place where loss is remembered and grief commemorated through collective experience; a place where sadness is expressed in company, vindicating it as a valid emotion in the realm of shared spaces. 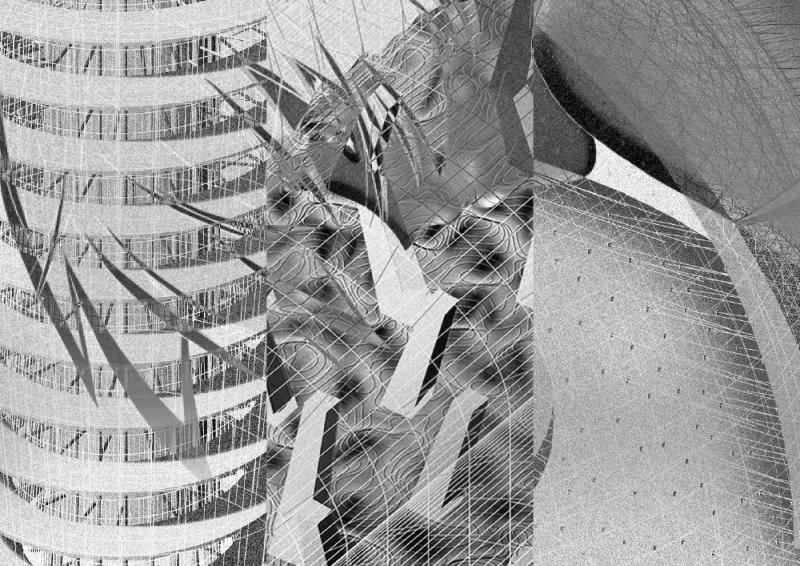 This is undoubtedly the hardest, most personal project I have ever dedicated myself to. The inner journey it put me through took me to states of anxiety, self-doubt and despair. It originated from an extremely uneasy place and it is made of very fragile materials: affection, affliction and grief. It was the way I found of exorcising the inner demons that still haunted me long after the darkest event of my life: the death of my father. Working on this project I have at times hated myself, thinking that taking this pain and translating it into architectural space was cruel or unworthy of the affects behind it. Creating from this place of pain was heartbreaking, reckless, and strangely therapeutic. It still is.

The perplexing scale of Berlin's destruction in the aftermath of the Second World War marks the entry of the city into the Anthropocene: the era in which humans beings have become a determining geological factor. The labour and endurance of Berliner women in the handling of more than 45 million cubic metres of dead city involved the birth of an early urbanism-of-waste and an unprecedented postnatural landscape. The city’s 18 artificial mountains witness its new metabolic condition, a dark ecology, hidden beneath the 20,000 atomised buildings that lie under the highest of them. Teufelsberg, erected over an uncompleted military academy designed by Albert Speer. The ruinous structure an NSA American espionage station, crowns its summit. As the highest point in West Berlin, it provided the Western Bloc a precious raw material: the ability to see and hear. This lost archive of material culture remains unspoken, just as sadness. Being the only one of the six basic emotions without a precise evolutionary purpose, its display remains foreign in public sphere. Its psychological and physiological determinants upon bodies set the tools to mould several telluric architectures. The constriction of blood vessels causes an increase in the conductivity of the skin, which makes us more sensitive to air movement. The entrance to the cenotaph is through the wind-scraper: a downward spiral path where air accompanies the descent amid a rising cold breeze. Sadness makes it difficult to make decisions. The garden of partial objects presents a linear space whose crossing is not. Incomplete forms, stranded in mounds of debris are radiant bodies tempered by geothermal energy, fed by the lower aquifers. While one traverses the topography of the waste along an indeterminate path to be chosen. Finally, a place to express emotion in company. Inside the tumulus, a tower of silence sits under the light of an optical fibre powered orb. On its hardened concrete niches grief is manifested in a collective act, in a space where the expression of one's vulnerability is not to be hidden, but shared with the other. 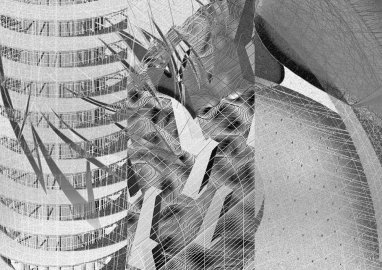 (on debris, oblivion and sadness) 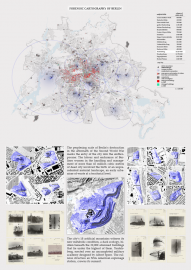 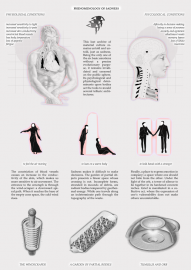 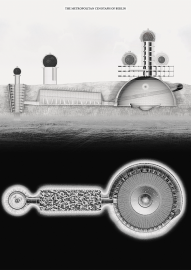 The Metropolitan Cenotaph of Berlin 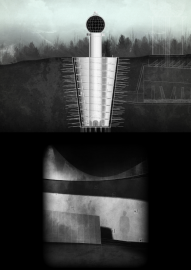 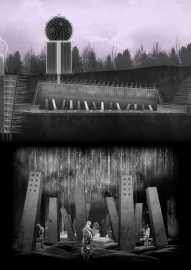 A Garden of bodies | you can(not) advance 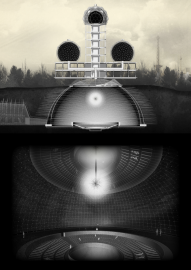 Tumulus and Orb | you are (not) alone