Landscape Conservation for the Island of Aliabet

Coastal management is one of the most indeterminate parts of urban planning for a resilient future. Ignoring minor miscalculation can result in devastating consequences. The overlooked social cost of the Sardar Sarovar Dam has left the island of Aliabet from an ecologically rich and diverse habitat of the bountiful wetland fauna to a saline wasteland. 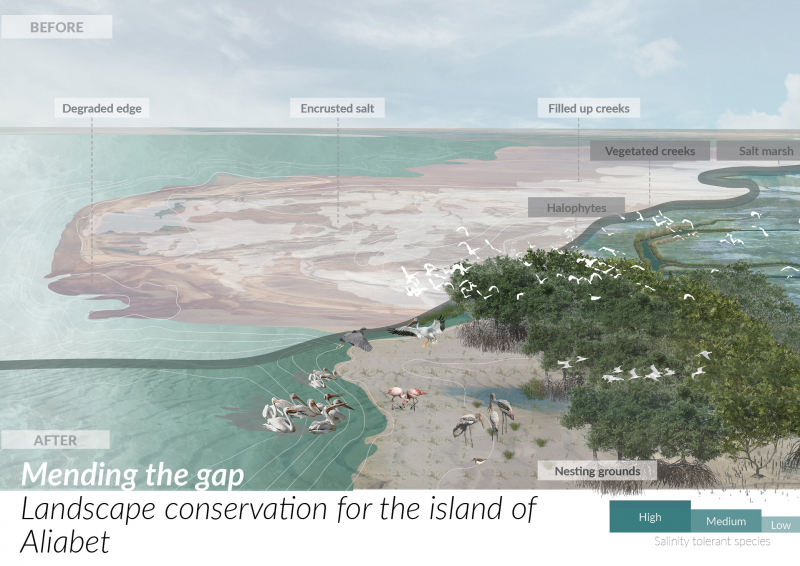 The former ecologically lush island of Aliabet from the estuary of the river Narmada is infamous for getting easily submerged during the High-high tides and the seasonal floods. Presently this island has formed connections with the mainland due to the depositions of the sea-sediments. The construction of the Sardar Sarovar Dam has lowered the river’s velocity to wash the island during ebb. The absence of this vital process required for the formation of the brackish water has further declined the growth of the local grass “Aal” and the mangroves. Leading the island to become a saline wasteland, a huge number of species are steered on a cusp of disappearance, bringing a major pause in the ecological cycle.

Studies show the prominent presence of nesting habitats of exotic migratory bird species, hilsa fishes and kharai camels on the island of Alia-bet before the construction of Sardar Sarovar Dam (Gross reservoir capacity of 0.95 M.ha.m) which is situated with an approx. distance of 110 km from the island. The proposal is to replenish the lost ecology essential to make the island habitable again. The first step begins with the planting of the polyhaline mangrove species on the degraded edges of the island to strengthen it from further erosion but to also allow it to filter the sediments from both the ends of the recreated mangrove swamps. The second step primarily focusses on retaining the saltwater intrusion by making two separate layers of the e-concrete embankments at strategic locations higher than the level of the Spring tides (3.5m) and the High-high-tides (6m). The embankments also help conserve the rain-water diluting the salinity of the land throughout for 2-3 seasonal cycles. The rain-water pools generated after the construction of the first layer of embankments will be flooded by the High-high tides during the monsoon, which helps form a brackish water zone promoting the growth of the native vegetation and the habitat for the local and the migratory birds. The second layer of the embankment will be higher than the High-high tides and thus will only conserve rain-water promoting freshwater habitats around it. This technique helps create various wetland habitats with different salinity levels, synthesising diverse vegetations and biodiversity on the island. The last step of the proposal is to encourage the native animal-herding community to cultivate the fodder for their livestock (approx. 800 camels and 1700 buffaloes), this gives the community a sense of ownership and responsibility towards the flourishment of the island of Aliabet. 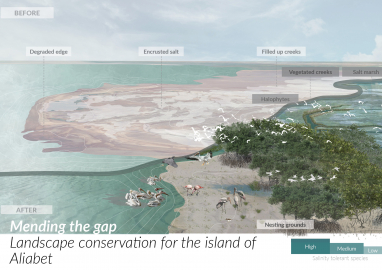 Coastal Edge before and after restoration 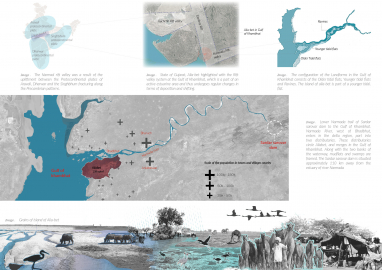 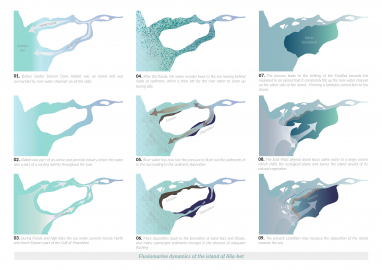 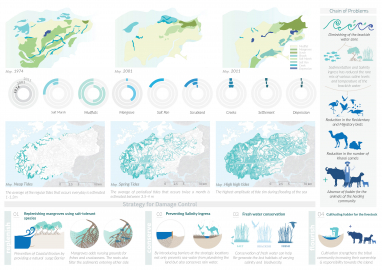 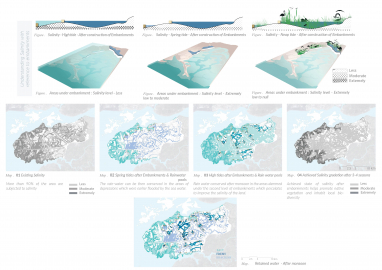 Understanding Salinity with respect to Earthen-dams 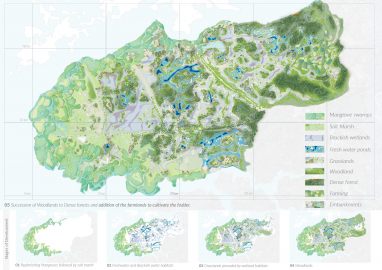 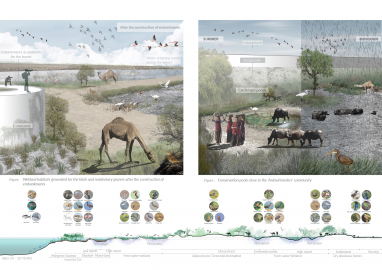