Field of Rooms is a project to spatialize rhizomatic human networks through a city of inhabitable rooms. In an architecture where each room is connected to an outdoor public space that makes up the roof of another room, residents can actively adjust the connectivity between the private inside and public outside.

As the Korean society undergoes dramatic demographic shifts such as increases in single-person households, plummeting birth rates, and avoidance of family formation, the current youth generation of South Korea has developed unconventional values. They mainly occupy either a corridor-room typology, like small isolated studios, or an LDK-room typology, like family houses and apartments. These typologies, however, cannot fully reflect the lifestyle of the upcoming generation defined by horizontal and sporadic social networks. Thus, this project proposes an outside-room typology that acts as their city.

This project creates a city through a network of rooms with a minimum area of private space. The horizontal spatial structure in which individual rooms with the same hierarchy are organically connected reflects the relationship between the individual and society in the new generation. As a spatial unit, the room does not depend on a common space such as a living room or corridor but simply exists in a relationship with another room. Therefore, the residents gain the right to choose how their rooms are connected to others by calibrating the line between private space and public space. Each room is a unit of 2.4m * 7.2m area and is divided into three parts: (A) facility area, (B) minimum residential area, and (C) variable area. One box-type unit and six types of stair units are assembled three-dimensionally, the upper surface (roof) of the room becoming vertical circulation and public outdoor space. The room is a physical device that mediates between the outside world and the individual. Individuals can use it in various ways, such as closing (C) to secure their own space, opening (C) to be integrated with the outside, or even creating commercial space to leverage the infinite connectivity. The modular nature of having the rooms as the only spatial element allows the rooms to adopt a rhizomatic configuration—that is, the structure can be expanded infinitely, and the Field of Rooms becomes a physical network created by the owners of the rooms. As a result, residents live in a city of similarly sized rooms, where each occupant’s preferences manifest spatially. Some might decorate the variable area of the room with a flower bed, some might set up a cafe, and some might create a playground by joining with another front yard of the room next doors. Each dweller lives in the continual redefining of relationships within society. 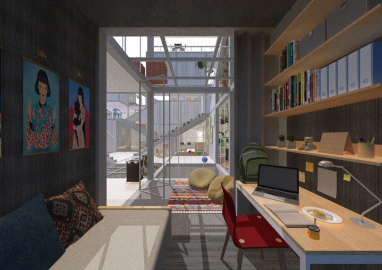 A Room and Other Rooms 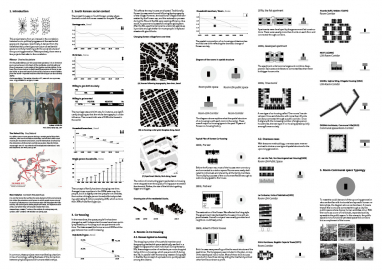 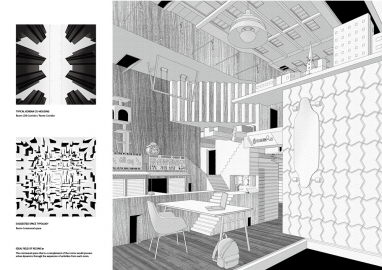 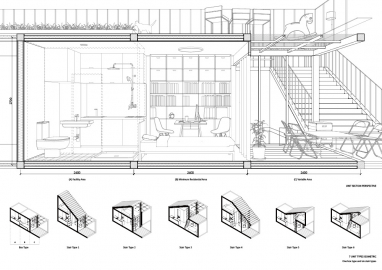 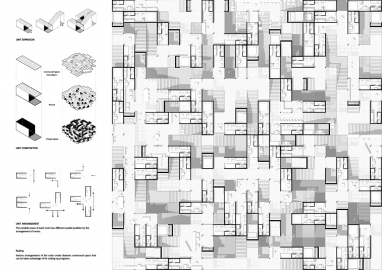 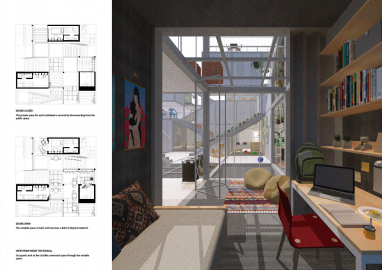 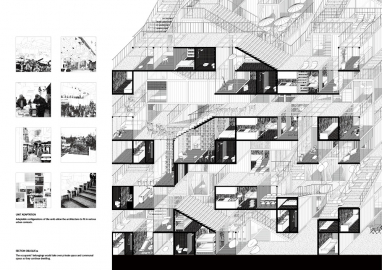