Riverside Archipelago is a utopian landscape strategy about managing the uncontrolled flow of Arachthos river in Epirus of Greece, caused by climate change. The project focuses on the mouth of the river and introduces alternative riverside infrastructures in order to turn the unfavorable condition of flooding into a sustainable process to the region. 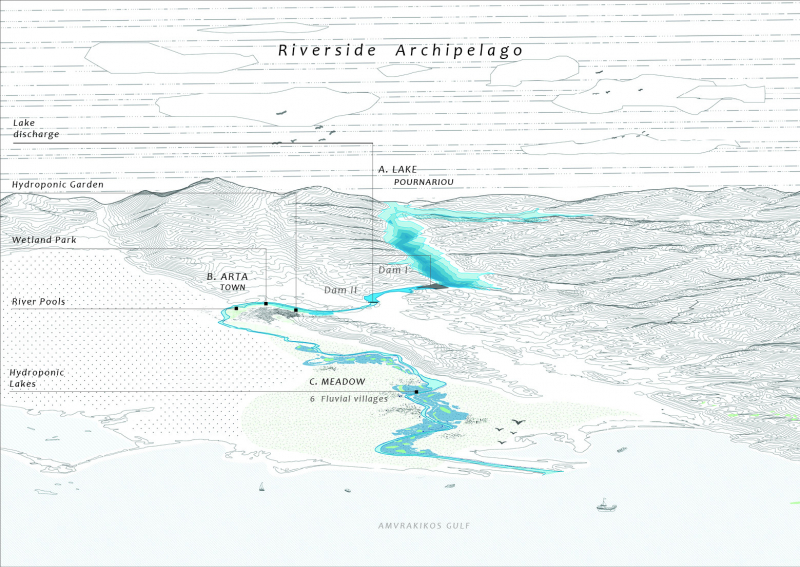 Arachthos is a fast-flowing rivers that springs from the mountain of Pindos and flows into the Amvrakikos bay. Because of its impetuous nature, the river has been dammed over the last 30 years to prevent severe floods. Its mouth is composed of three different landscapes: an artificial lake with two hydroelectric dams, an urban landscape and a productive meadow with six fluvial settlements. The river mouth face severe flood emergencies almost every year for the last decade causing the destruction of private properties and agricultural fields located on the riverside. The two hydroelectric dams that were constructed in the 80’s cannot control the current water flow and thus, the floods are inevitable.

Therefore, a landscape strategy is proposed which includes three phases. The first phase of the strategy proposes the controlled change of the river flow through a different dam management. The two dams will allow more water to pass before the high-risk period in order to discharge the artificial lake and prepare it for the increased winter flow of water. The second phase of the strategy includes the regeneration of the town’s riverfront. Arachthos as a raging river , has caused many severe floods in the town of Arta in the past. The urban planning of the city proves a hydrophobic attitude and while the city is encircled by the river, it has nevertheless kept a safe distance from the riparian land. The design of three infrastructures at the riverfront of ​​the city aims to gradually strengthen the inhabitants' relationship with the river water by introducing new activities and perspectives. Therefore, the proposal consists of, two river pools, a wetland park and a hydroponic garden. Finally, the third part of the strategy is about the phasing flooding of the meadow for turning existing agriculture into water cultivation. Once the two dams release a bigger amount of water, the river will gradually flood fluvial areas on both sides of the river at locations where the topography permits it and consequently, riverside lakes will be formed. This agricultural areas that turn into lakes can be cultivated again in the water using hydroponic practices. Different fluvial wetlands will be formed to prevent the flood of the villages and hydroponic platforms will be installed on the lakes. The meadow will be transformed into a hydroponic archipelago where hydroponic “islands” will float on the new lakes. In conclusion, this strategy will turn the river mouth into a natural mechanism that forms gradually the future wetlands and sustains the hydroponic lakes at the meadow. This vision redefines the rural Greek landscape and turns the emergency of floods into a sustainable process for an alternative cultivation, introducing a different perspective to the region. 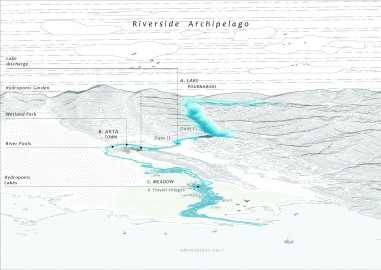 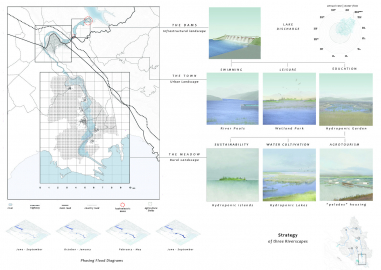 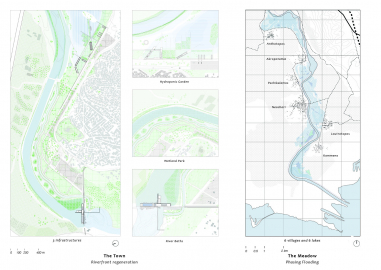 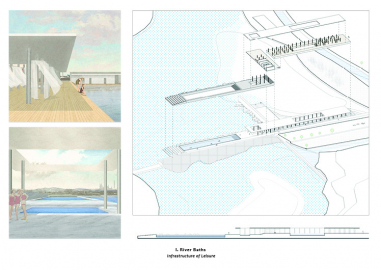 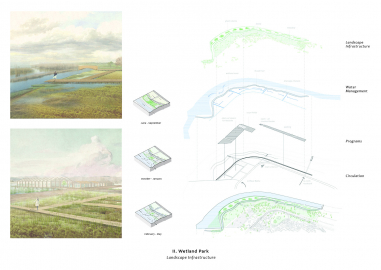 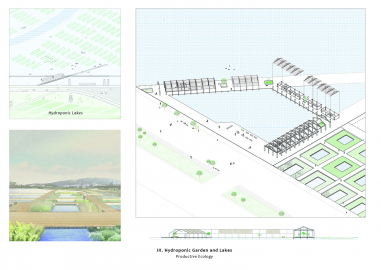 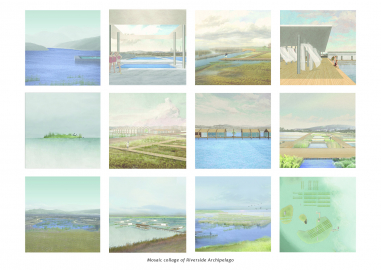