A new artists residence for the Union of Finnish Art Associations

The new artists residence reacts to the place of a demolished early 20th century atelier house of which only the foundation remains. The intention of the project is to reinterpret the site in order to the existing and the new to merge and strengthen each other and finally to offer the artist an invigorating experience of living and working in nature. 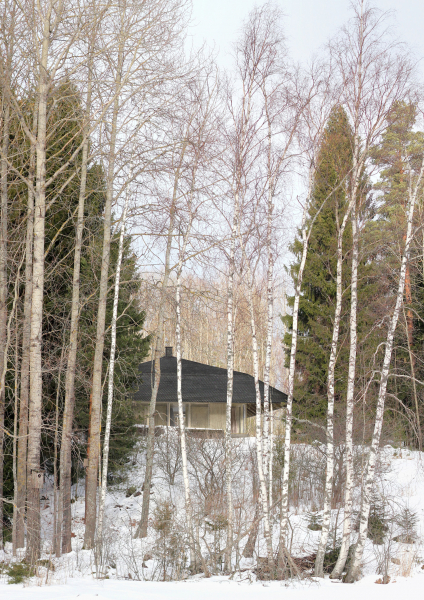 The demolished atelier in Vilniemi was part of a phenomenon that took place among the Finnish artists at the turn of the 20th century. Due to the hardening grip of the Russian rule in Finland the artists fled the cities to the forests and built there their dream ateliers. The atelier in Vilniemi was, however, an unusual one for these ateliers: unlike the Karelia-influenced log buildings of his colleagues, the artist residing in Vilniemi designed a bold, pyramid-roofed building of an oriental style. Finding the solution to the brief meant balancing between two questions: how to react to the memory of the old atelier that was unusual and what attitude to take toward the heritage of wilderness ateliers as such.

To escape the city life of the early 1900s, Georg Sigurd Wettenhovi-Aspa, a Finnish painter built himself a wilderness atelier in Vilniemi. These forest ateliers built at that time for the same reason, to escape, form today the heritage of wilderness ateliers in Finland. Their designs drew inspiration from the simple life of the peasants, the medieval castles and the Karelia region. However, as a wilderness atelier the atelier in Vilniemi was unusual: Aspa designed a bold, pyramid-roofed building of an oriental style. Brushing his long white beard and dressed all in white he enjoyed barefooted the first snow around his atelier. After the death of Aspa in 1946 the large 4-hectare plot with the villa came to the possession of the Union of Finnish art associations, but the building was left to decay, and it was demolished in 1981. Today the vegetation has taken over the remaining foundation. However, the concrete steps still peek from top of the hill and can be seen from the lake. In the project the old foundation is reassembled, filled with earth and gravel to make a raised platform, a stone garden. The foundation of the new artists residence is integrated into the old and the floor brought to the level of the stone garden to enable a connection between inside and outside, the new and the old. By strolling around the terrace one can imagine the ghost of the old atelier. At arrival the car is left behind on a clearing. The forest path takes one to the steps of the old atelier. While climbing them up a view to the lake opens. As in the case of the old atelier the roof, a pine cone-like, tarred hipped roof gives the new building its identity. The living spaces circle around the perimeter and open toward the nature. The long and low eaves offer psychological and physical protection. In contrast to the living spaces connected to the outside the atelier space is a world of its own. The translucent skylight leaves the deep bay window the only view to the outside. A short film was made to bring these images to life. The project is a winning proposal of an invited student competition for the new atelier, organized by the UFAA and Aalto University.

View from the lake 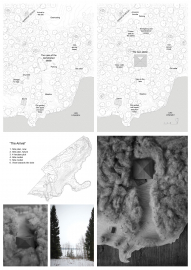 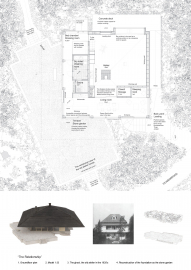 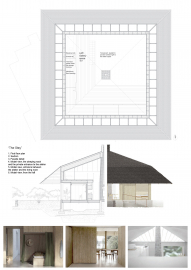 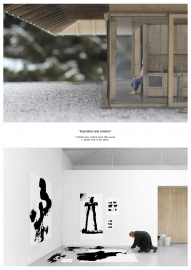 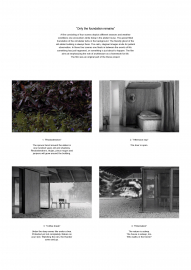 Only the foundation remains 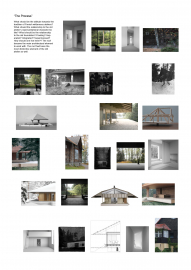 School of Arts, Design and Architecture