Defining a Language of Contemporary Civic Use

The project is an approach for the regeneration of Stoke, an epitome of Britain’s post-insustrial towns. Challenging its architectural language of monumentality and democratising the image of public institutions, a venue for celebration and protest is proposed, allowing integration and acceptance between institutions and society. 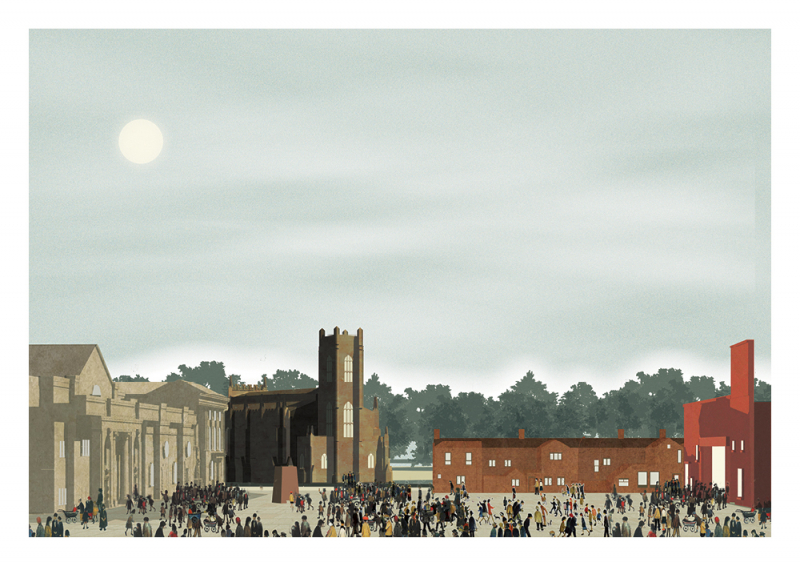 During a period of rapid industrialisation, the towns of Stoke-on-Trent captured the abundance of civic pride, wealth and skill through the architecture of their public buildings: cathedrals, museums and town halls. Branded the ‘Brexit Capital of Britain’, the decline in the potteries has left the six towns of Stoke with no appreciable centre and a poorly developed public realm, surrounded by design language leaving Stoke’s opposing typologies, of factory warehouses and grand civic buildings, unreconciled. Severe austerity budget cuts further force council services to be dispersed, leaving the town in lack of a unified civic centre and no formal participation of public institutions in city life.

The project defines a civic centre in a city that has grown without one. Spatially and compositionally, contradictions between implied meaning and function create inconsistencies, encouraging the seemingly dissimilar typologies of industrial and civic to exist side by side and thus manifest the importance of their shared history. Not a landmark, rather an object framing the space around it, the building shapes an urban room framed by faces looking onto it. Offering its theatrical faces to negotiate between the town hall as a seat of power and the church as a symbol of community, the building connects to the language of the potteries by adopting the typology of an industrial shed, bringing civic qualities through generosity of space: a multi-purpose theatre provides a venue for celebration and protest, located opposite the seat of power, offering a public space that never existed within the town hall. On both sides, large doors connect the theatre to the square. Once opened, the space transforms from an exclusive venue to an extension of the public realm. Each façade exaggerates its context to address the wider urban space. The façade facing the town hall creates a stage for the city: the large hall opens to the square to become a small room attached to it, while its façade becomes a flat stage set around it. With an overarching symmetry, the façade facing the city implies a monument built as a power statement, contradicted by a generous threshold to the hall behind. With spatial arrangement borrowed from industrial typologies, the building uses the formal language of public buildings to create a civic identity. Interpreting a detail of Stoke Town Hall, the project defines the new role of a public institution. The proposed construction uses standard elements to create a composition that recalls classical ornamentation, however, subtle shifts of colour and scale hint at a sense of play and exploration. Situated on the timeline of Stoke’s architectural evolution, the building democratises the town by challenging the reciprocity between material lightness and civic weight - through a single detail. 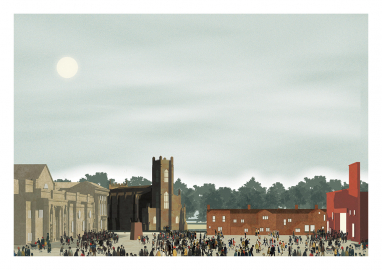 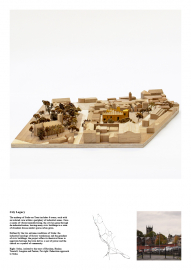 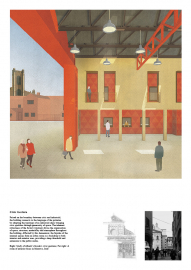 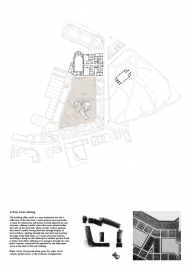 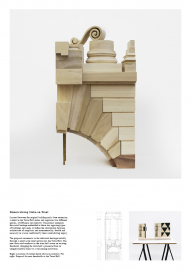 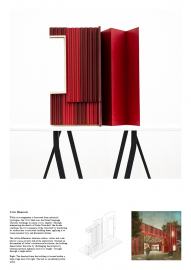