Three Places to Inhabit the Mountain Range in the Maule Region

Three small-scale projects that worked as site-specific interventions, linked with the cultural and natural landscape

The three projects have been designed, managed and built by students of Universidad de Talca’s Architecture School, as part of their final year project, a graduation process that considers dealing with all the variables associated to a low cost-small-scale construction: investigation, management, financing, design and building. 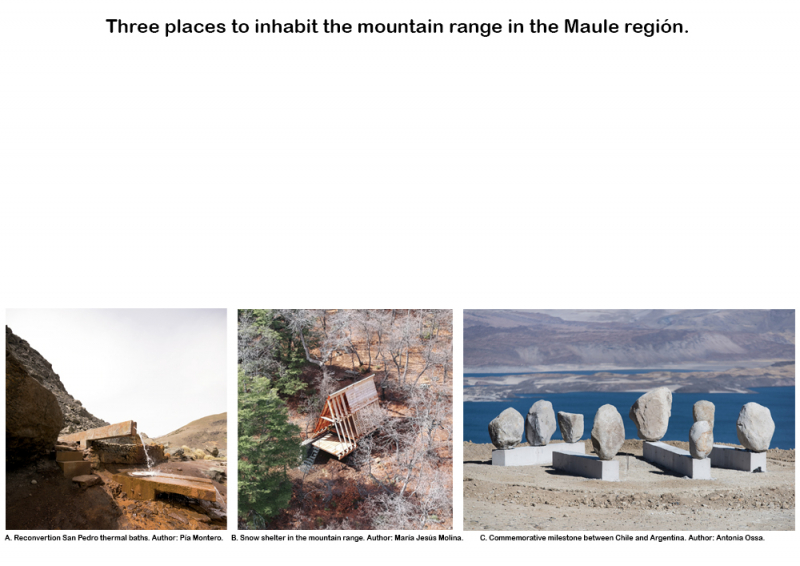 The three projects have a common element an understanding of the territory and the detail, giving a wide range of situations linked to what could be understand as ‘living in the mountain’. The climatic conditions were crucial to the construction of the projects, defining specific design strategies for each case.

San Pedro’s Thermal Baths Recovery. San Pedro’s Thermal Baths are natural pools of mud and hot water with various minerals and therapeutic properties, which were transformed in a public space in the mountain range, for foreigners and inhabitants of the area. The work aims to consolidate San Pedro’s Thermal Baths, based on three minimal interventions, rediscovering a forgotten cultural and natural heritage, and recovering a way of living in the high mountains. The material condition of the work is the result of the study of the surroundings and its stony consistency, always linked to water courses. Different minerals in the thermal water were tinting the concrete with an intense orange colour and generated a salt crust that waterproofed the soil and allowed the firm passage between the pools. Snow Shelter in the Mountain Range. The work aims to contribute to the existing touristic infrastructure with a low cost and sustainable intervention. The shelter is constructed with three main elements: a stone plinth, a platform elevated from the ground and two wooden walls that protect the space from harsh climate conditions. Native wood from dead trees of the site is used in the project. The triangular shape of the work is related to constructive typologies associated to the mountain climate, as the cabins that are spotted in the surroundings. The Snow Shelter also works as a prototype, with a simple design that could be adapted to nearby terrains. Commemorative Milestone between Chile and Argentina. This project consists in recognise and represent through a constructed milestone, the work and management of a group of Chilean and Argentinian people. For more than 50 years they have pushed the idea to connect and construct and international highway between Chile and Argentina. It consists of three types of pieces: a concrete ramp, four concrete plinths and eight granite stones with variable weights, between 2 and 4 tons. The selection of this material is related with the original inhabitants of this area, the Pehuenches, who used to use stones in vertical positions to mark others their presence in the territory. 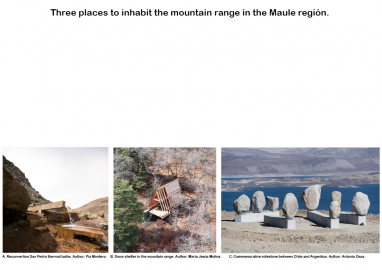 Three places to inhabit the mountain range in the Maule región. 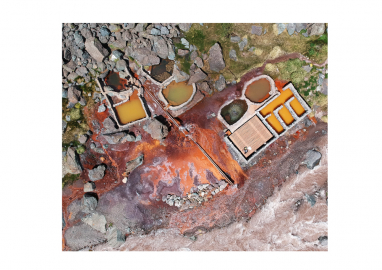 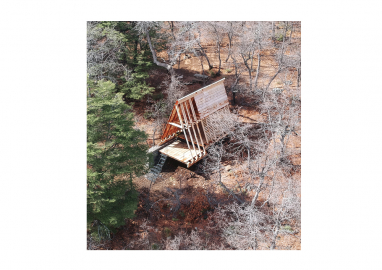 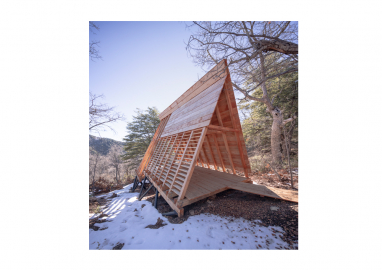 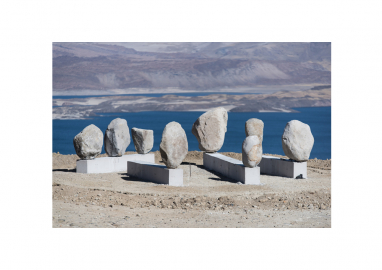 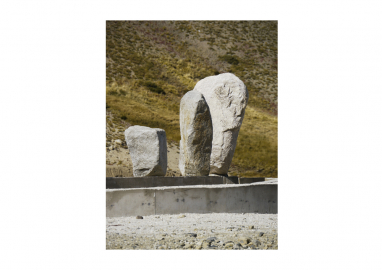