From camp to city, from shelter to Home

Is there an alternative to the infinite multitude of tents that make up the typical image of a refugee camp? Are they really temporary settlements nowadays? Does it make sense then to keep on designing so many non-permanent shelters? This thesis work aims to set up new and stable living spaces that can bring refugees closer to their “Sense of Home”. 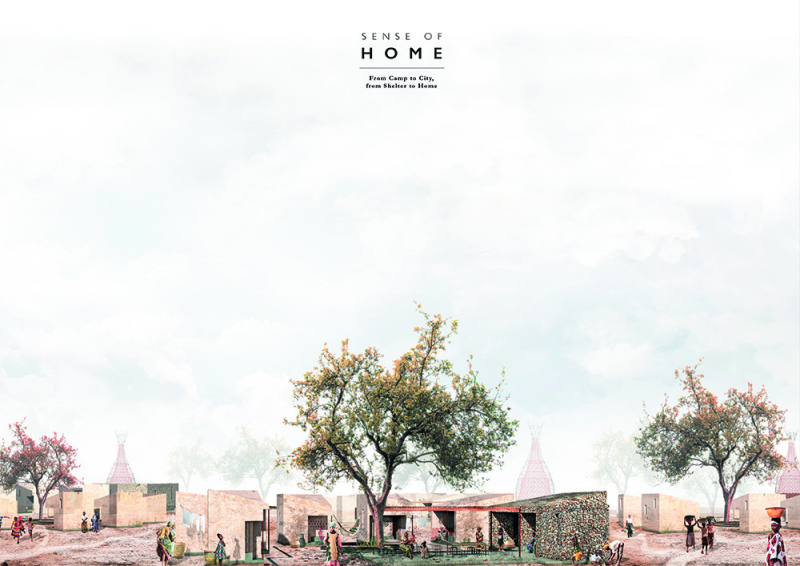 The expression “Sense of Home” is referred to a Nordic concept based on the deep meaning of the term Home, far from “House”. Home can be defined as the space that offers protection from the external world, but also a fundamental space for personal realization, with a specific atmosphere, different from any other places. A Home is not just a containing box, but part of the identity of the inhabitant himself, with whom it establishes an intimate connection. Refugees spend in camps a considerable piece of lifetime; here the need to introduce not just a temporary shelter, or containing box, but a proper house, inserted in a specific system and social structure, which will be Home for many refugees for several years.

“Sense of Home” considers the dramatic dynamics behind the vast refugee camps that host enormous flows of population. It is evident how camps are still designed as temporary settlements and therefore perceived by their users as places of passage and waiting. However, the average time that refugees spend in camps is 17 years (UNHCR), which is a considerable period of lifetime for a human being. The design process is about the transition of camps from temporary places to permanent settlements, and the goal is to bring some “Sense of Home” into what today looks more like a military camp or a prison than a place to live. We are also assisting to a recent proliferation of new shelter projects; in essence, temporary objects, often decontextualized or designed just in the detail scale, without reflecting on the aggregative and urban relationships in advance. Hence the effort in the thesis process is to consider those as well, exploring all the aspects and scales that influence life in such a situation and to improve them towards a better and stable life quality. The relation with the other residential units and with the outdoor space bring to new living spaces that should no longer be felt as tents of waiting but as houses for the future. Shimelba refugee camp, located in Ethiopia, is the case study considered. The deep understanding of the current situation leads to a design phase that starts from the broadest scale, with the reorganization of the settlement structure, up to the aggregative scale of the housing units. Therefore, a new residential composition, made of clusters and communities instead of the usual rigid grid, is chosen and public and leisure spaces are re-integrated too. This kind of areas, including playgrounds, sport and gathering spots are entirely left apart in traditional refugee camps, but they’re essential. There’s also a productive side of the project that shows how these communities will improve their quality of life, becoming gradually self-sufficient through the generation of water (Warka water+impluvium), energy (Warka Water+expansion of the grid) and food (MSG: Multi-storey gardens). 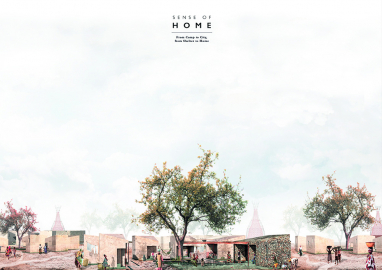 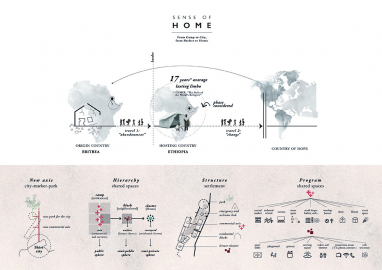 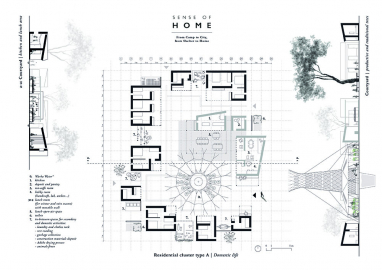 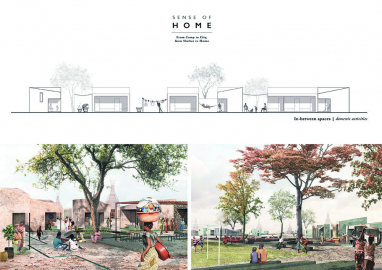 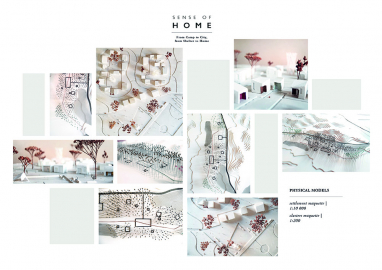