The wall as a paradigm of the territory

A project for the Landscape

« The wall as a paradigm of the territory » investigates the construction of the landscape by considering the retaining wall as an architectural element. From the specific region of the Mounts of Cantals in France, home of the largest stratovolcano in Europe, the project proposes five visual archetypes, each responding to a specific natural risk. 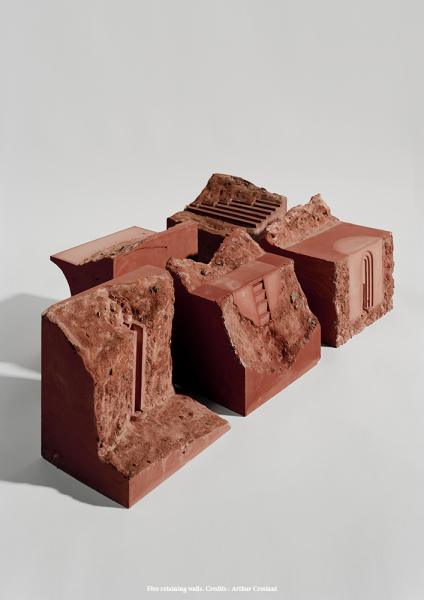 Instead of considering infrastructure purely in its political and structural role – such as ressource and risk management – this project aims to reimagine it as a theoretical and architectural tool which shapes its environnement. As an engineering structure, the retaining wall responds to hazards such as landslides, erosions and earthquakes. But is it possible for such a structure to add new meaning to the landscape, beyond responding to the territory’s immediate, pragmatic concerns ? Could infrastructure and architecture work together to reshape the idea of territory ? This project aims to use the retaining wall as a way to question the relationship between territory, infrastructure and landscape.

Located in the Volcanoes Regional Park of the Auvergne region in France, the Mounts of Cantal is home to the largest stratovolcano in Europe. The area has been stratified through time with significant ground movements – eruptions, ice melts, landslides, debris – making it highly exposed to natural risks. The volcano’s formal identity, with its chain circular peaks, filiform valleys and plateaus, constitutes not only a territory but an architecture with its own spatial boundaries and relationships. The project - based on a territory in constant motion - is developed through an ensemble of five retaining walls, each responding to a natural risk the area presents due to the volcano: landslide, erosion, mudflow, rockfall, collapse. These walls, shaped in part by the counter-forces generated from these movements, are also elements of an architecture aiming to reveal the underlying landscape of the territory. The five structures all present a minimalistic architecture. A group of terraced walls form an open theater which protects the lake against landslides. The dam becomes a roof which shelters the road from the mountain’s mudflows. A buttress wall becomes the opening of an underground stream flowing from talus deposits of a collapse. Two walls inserted within a rockfall reveal a water source from above, from which hikers can quench their thirst. The last retaining wall, an erosion drainage system, acts as a pedestrian bridge over a stream while continuing its flow through a spillway. These retaining walls not only influence the perception of the environment, they also reshape the form and composition of the land in an ecological manner. They are to be made out of the construction site’s local earth rubbles, which are mixed into the concrete in lieu of sand. The structures’ textures and colors are literally made out of the physical aspect of the landscape. 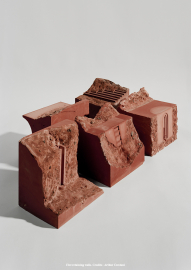 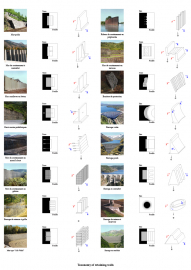 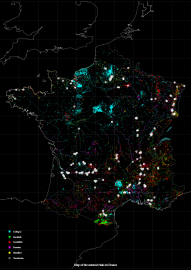 Map of the natural risks in France 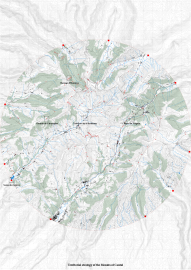 Territorial strategy of the Mounts of Cantal 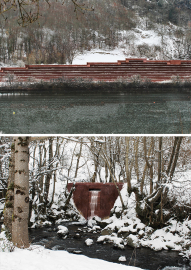 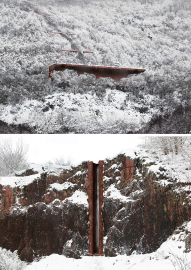 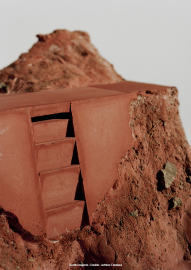